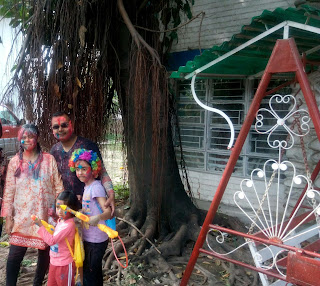 Memoirs about life in the forces won’t be complete without a chapter on how we celebrate all festivals with true vigour and enthusiasm. Maybe the constant idea of meeting death just makes us grab every excuse to celebrate the fact that we are alive and living with our loved ones. And one of the best festival to give us this excuse is the festival of colours: Holi. No one can stay away from fun on this day inside an Air Force campus. The preparations start a few days prior with ladies cooking delicious finger foods like gujiya, malpua and dahi bhallas; the teenagers collecting firewood and buying colours, gullal and balloons; the young ones buying pichkaris and the naughty gentlemen singing and slipping a fair share of bhang in their wives’ thandais. On the D-day, the early birds can’t wait and land on your doors without any invite and splash colours all over your faces and body. And all that they keep repeating throughout the day is “Bura na mano, maam, HOLI HAI” without getting any hate speeches from anyone because Holi is a day for celebrating the feeling of love, togetherness and merriment with a few healthy pranks. On this day, we all become one: no ranks, no seniority, no gender, no age come in between. 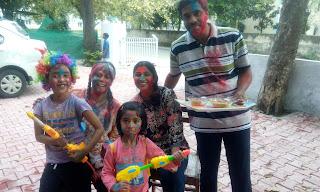 You can land at anybody’s place on HOLI without an invite and at whatever time suits you and you are sure to be treated well with lots of delicious finger food and a few pranks too. After everyone gathered at the mess, a second round of merriment would start with ladies being drowned into small pools full of flowers, mud and colours. But the last stroke would always be played by the women when they took revenge on young bachelors and spinsters with showers of beer, water and whisky altogether in one go. The pranks, the drinks and the sensual dances would not make you awkward or uncomfortable for even a minute. As a result I would always look forward to painting people on the festival of colours. 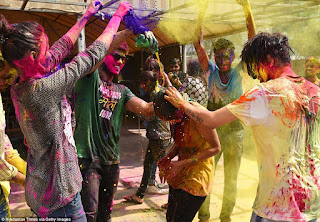 But I was once again introduced to the harsh realities of civil streets when I saw my civilian friends living in the residential colonies in Chandigarh, especially the young women to be not at all excited about HOLI. In fact they felt it was one day to get away from the city on a holiday to some unknown place as they wanted to avoid getting caught by the wrong kind of people on this day. They felt it was actually one more day when the young boys would get a license to use their culture to molest the girls in open daylights with their eve teasing, ogling, abuses and sexually coloured remarks. A few years ago when I was living as a Hostellite, I remembered how we used to play HOLI with full enthusiasm and energy inside the closed confines of our Ladies Hostel. We could see the boys enjoying themselves on the streets and inside their hostel too, but we dared not move out on the street that day. 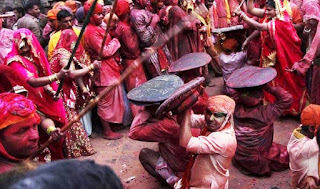 How funny it was that in a country’s urban cities women were dead afraid to fall prey to the opposite gender’s Hooliganism when in one corner of the country women celebrated HOLI beating their husbands publicly. Yes, HOLI which is actually another Indian festival marking the win of good over evil through its bonfire, onset of harvest and summer/ closing of winter for farmers; held more significance for women as it also marked a celebration of love amongst Lord Krishna and his women followers called Gopikas and in them, the arch follower was a married woman named Radha. In Vrindavan, Mathura and neighbouring villages of Barsana, HOLI is still seen as that one day when women are allowed to live for pleasure. 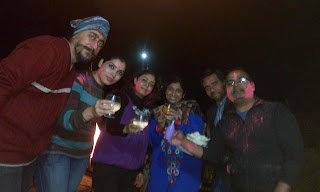 In fact, on the Basant Poornima, the festival starts with the eldest male member of the family putting colour on the members of the family. And from that day, even the women in the family are free to act as they wish till the Holi celebrations are not over.  Men and Women-known, unknown to each other, touch each other’s faces, hands and body parts to apply colour/gulaal. This act of sexual gratification takes place in front of the family, community and society. Similarly, it is not considered a taboo to use the cuss words on this day and everybody is free to lose control after consuming Bhang, a kind of intoxicating drink. 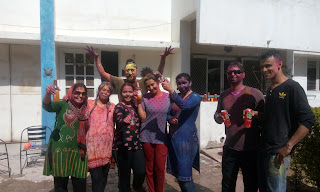 HOLI, the festival of colours is another example of how the otherwise male-dominated society, tried to let the women enjoy their and the opposite sex’s sensuality. Much before the branch of Freudian Psychoanalysis reached India, the Indians were already practicing what Freud and Carl Jung had started to observe in European and German societies. Let’s take a look at what Freud had to say  about a human personality and how Indian festivals like Holi demonstrates some of his ideas. 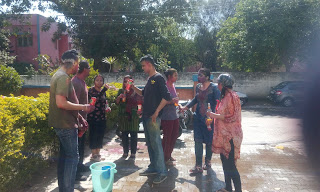 Freud analyzed the human psyche in terms of three elements, which he calls, the Id, Ego, and Super-Ego. The Id is the unorganized part of the psyche that contains a human’s instinctual drives. The pleasure principle drives the Id to seek immediate gratification of all needs, wants, and desires.Like a child biting or crying as he/she wishes or in time of crisis even adult does desperate movements such as biting nails and scratching bellies.  Clearly instant gratification of these desires is not always possible and thus psychological tension is created that needs to somehow be discharged. The desires of the Id give rise to the Ego, which is generally the component of the psyche that ensures that the impulses of the Id are expressed in a way that is acceptable to the real world. The Ego operates according to the reality principle. 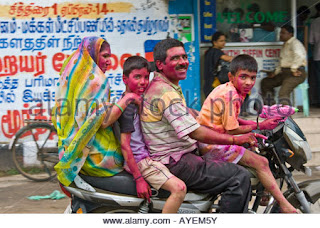 The Ego has a set of psychic functions able to distinguish between fantasy and reality. It organizes thoughts and makes sense of the world. The Ego represents reason and common sense. The ego is said to serve three masters: the external world, the Id, and the Super-Ego. The Super-Ego is the third part of Freud’s system. The Super-Ego reflects the internalization of cultural rules, mainly taught by parents applying their guidance and influence. The Super-Ego aims for perfection. It is a psychic agency that criticizes and prohibits ones drives, fantasies, feelings, and actions. The Super-Ego works in contradiction to the Id because it strives to act in a manner that is socially appropriate.
Festivals such as Holi become such accepted platforms for common people to express their suppressed feelings. On this one day, men become approachable by showing some compassion while applying colours,  playing pranks, singing songs and dancing. And on the other hand, women are allowed to wear revealing clothes(that’s why those tight white salwar suits feature in Bollywood’s Holi songs), shout loudly, use the four letter words or pass lewd remarks at men without being procrastinated. 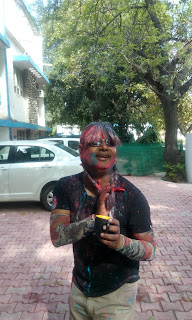 As a consequence of the Super-Ego conflicting with the demands of the Id, the Ego often has to mediate between the two. To overcome these anxieties the Ego employs defense mechanisms. One defense mechanism Freud talks about in particular is Sublimation. Sublimation is the defense mechanism where socially unacceptable impulses or desires are consciously transformed into socially acceptable behaviors or actions, possibly resulting in a long-term conversion of the initial impulse.  An apt example of sublimation is when even the widows of Vrindavan are allowed to express their happiness with flowers and colours during the Holi festival. And, the otherwise docile housewives hiding their faces behind long ghungats are allowed to beat their husbands with big bamboos in Barsana. Freud saw sublimation as an especially conspicuous feature of cultural development. It is also by analyzing these aspects and their functions that we are able to interpret why human beings behave the way they do on both an individual and cultural level. 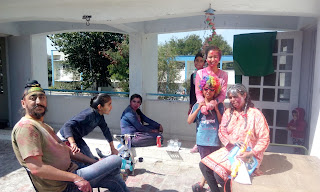 These interpretations allow us to derive a better understanding of each other’s behavior and also allow us to engage in self-reflection, to better understand our own behavior in today’s context. So when in ancient times in India, the otherwise male-dominated society, men attempted Sublimation (a defense mechanism) to put women on a higher pedestal and let them be worshipped as Goddess. And at other times, they also let them explore their own carnal pleasures through festivals such as Holi. This day, men and women could let their personalities be governed by their Id and satisfied all their carnal pleasures through colours.

But in this urban rootless life of modern Indians, they forget the true spirit with which these festivals were created. Ironically, Holi which marked complete pleasure for everyone, has become another instance where in the garb of tradition, young perverts turn to hooliganism. They try to satisfy their carnal desires by molesting young girls caught unaware on streets while looking out for pure fun on this one day which actually represents nothing else but happiness. And this is when I once again consider myself lucky to be living in Meghalaya, one of the few surviving matrilineal societies of the world. Although I miss the Pichkari, balloons and my gujiyas here in Shillong, I find there is actually no reason to celebrate Holi on one specific day here. Because, for women, every new day is a Holiday as she is free to give in to her carnal desires, worldly pleasures and loving glances from the opposite sex as she if free to celebrate her life every day. But for others, may be these lines will summarise the importance of colours: