by Sqn Ldr Vidula Abhyankar Retd
in Life and Travel
700 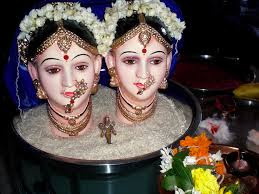 {Goddess Parvati,you are the auspiciousness of all that is auspicious. You are  the consort of Lord Shiva, who grants every desire of one’s heart. I take refuge in thy feet Gauri. I bow to thee, great mother, (Narayaani).}

On Ganesh Chaturthi when Lord Ganesha enters our homes,He brings peace, happiness and prosperity in our lives. And after a few days his two sisters called Jyestha and Kanishtha (Elder and Younger sister) also named Gauri join Him.For many it will be a surprising thing to call Gauri Lord Ganesha‘s sister. In Hindus,it is a widely known fact that Goddess Parvati is also known as Gauri, then how can the mother suddenly become a sister of her own son? But, Hindu religion is one of the most exciting religions of the world because of such intriguing practices one finds in different parts of the country.

For some married Indian women,who believe in Gauri being none other than Lord Ganesha‘s mother Parvati, Gauri Pujan is done one day prior to Ganesha Chaturthi that is on Bhadrapada Shukla Tritiya. This justifies the Ganesh Chaturthi being a celebration of the unique way in which Lord Ganesha was created not borne by Goddess Parvati or Gauri who is also considered to be a form of Adi Shakti. 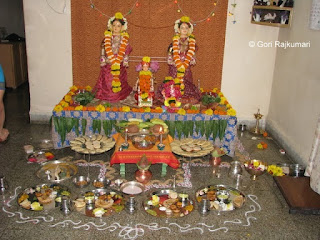 But for many in Maharashtra, Gauri Ganapati Pujan takes place one or two days after Ganesh Chaturthi. This Pujan is also associated with the fact that the married women of the house are invited back to the house for this Puja. So their arrival is much awaited as that of the Gauri Ganapati. This used to be a real big day for the mothers whose daughters returned to their arms after spending a long time at their In-laws Houses. So, married women,generally the eldest in the house make  two idols of Gauri with turmeric and dress them up as beautiful married women before doing the Sthapana Puja. They offer them with different kinds of delicious food items,flowers and gifts. Women call their married/unmarried lady friends for Haldi-Kumkum Ceremony to seek blessings of their Gauris and Lord Ganesha,they play some traditional games and present some gifts to all of them. 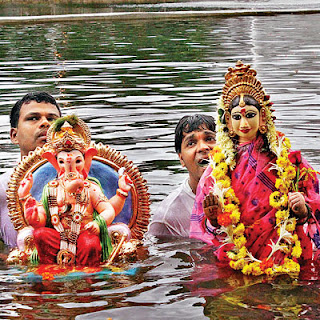 Generally Gauri idols are kept for three-four days after their arrival. These idols are also immersed in water similar to the idol of Lord Ganesha. In some households,the faces of the idols are not immersed and they are preserved for many generations.In fact,they are handed over from one generation to another. The logic behind why and how Gauri becomes the mother for a few devotees and the sister for a few others is very similar to the dual nature of Lord Ganesha‘s so-called relationship status: celibate or married.

More about that tomorrow, for today let’s enjoy the fact that in whatever relation Lord Ganesha brings with Him, the woman in His Life back. So, Lord Ganesha‘s arrival is also an occasion to acknowledge and celebrate the fact that it is Woman, in any form,be it the Gauri or the Kali, creates the path for material and eclectic wealth. In addition, it at least provides for an opportunity to the women folk of the house to display their culinary skills,their interior decoration skills and above all maintain marital harmony with the One who is nothing other than the Lord Ganesha in their lives.

Let’s enjoy the Cosmic Connections between Gauri and Lord Ganesha.

What is Lord Ganesha's Marital Status: Celibate or Married