by Sqn Ldr Vidula Abhyankar Retd
in Others
0 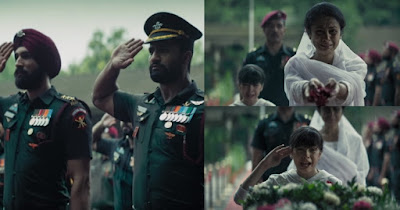 While the last week saw some patriotic emotions running high as the Bollywood drama on Uri Attacks starring Vicky Kaushal and Yami Gautam hit the theaters; another video of young sons and daughters paying tributes to their martyred parents became viral on social media. The reel life and real life once again submerged to remind us of the young Faulads (Fauji Aulads/Kids) trying to forget their personal losses over the motherland’s security.

A few years back when the Pakistani terrorists surprised the Army personnel with sudden attack at Uri in J&K region, Col Munindra Nath Rai, who was commanding 42 Rashtriya Rifles battalion in the region, jumped to save his men. While he led his men from the front in this attack, he gave the ultimate sacrifice himself. The 39-year old Colonel had three children, Alka, his daughter being the eldest. In a very similar way to what was shown in the movie, the brave girl tried to control her emotions and raised her hand to salute her father and shouted the Regiment’s war cry. But being a child, the girl couldn’t control herself. That is when the whole regiment shouted along with her. I am sure all those who saw the video and the movie could not have controlled their tears.
Following the attack, there were other news reports too where very young children paid tributes to their martyred fathers, while some others did not even know what was going around during their last rites processions. Some other elder children had to attempt for their Board exams immediately after the deaths of their fathers. They all continued their normal lives, after the attacks, for the outsiders like us. We all forgot about them until we saw the movie Uri and were reminded of their irreparable losses. 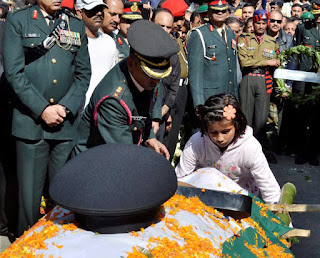 Throughout the movie, I kept wondering about how the young ones who did not know much about their parents’ job profiles, who wouldn’t understand international politics and what is Jihad; react to the death of their parents with such composure! Who taught them to be proud of their father’s death? Who taught them about patriotism? Did they even understand that their father had sacrificed his life for the nation’s cause? Would they never be angry about the father choosing the nation over them?

The movie reminded me of another incident I had shared with a child about death. A few years ago, while I was playing in the park with my niece; we found a dead dog. She instantly recognised it to be her friend’s pet and took me to her mother to tell her about it. The mother immediately came out as soon as she saw the dead pet and told me and my niece to be quiet. “You know, I have not yet introduced the concept of death to my daughter. So please, don’t tell her about this. I will think of what to do.” This reminded me of many of my friends who for a long time kept saying that their grandmother had been called by the God to live with Him, because God loved her too much. Many others used to say that when somebody died, it just meant that they go to a faraway land to live because they are angry with us.

Now, what would these young ones faced with the ceremonial last rites of their fathers be told? Who would have broken the news to them? How would they have reacted? Would revenge, anger, frustration also be a reason for their tears? Would they take to guns? Or would they just give up hope after seeing their mother in deep mourning? 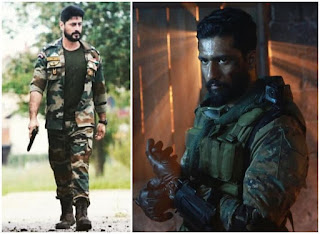 There is another scene in the movie Uri where the character played by Vicky Kaushal, Major Vihaan encounters a young boy with a gun in the PoK terrorist camp. For a moment, he hesitates as if he is confused whether to kill the young one or be killed at his hands! But then with extreme care he tries to take over his gun and drags him into a room and bolts it from outside for his safety. While killing all the other terrorists, he doesn’t hesitate and is very clear in taking revenge of his friend’s deaths. But in this one case, he lets the boy live. Where did the revengeful thoughts go? Wasn’t this a direct denial of the mission that there should be no live witness of the attack?

His decision had nothing to do with patriotism, jingoism of Indian Army / SF operatives. It was a clear display of how he looked at life and death in the same way. He was not out there to kill people ruthlessly and validate it saying he had a license to kill.

Is this what we need to teach our children about death? Death is everywhere, around us. Still, it is nothing at all. Everyone would end their journey called life someday.  Not all of us will get a ceremonial funeral like these martyrs. Our death may not even get a mention in the Obituary columns of some newspapers. Still we will be in the memory of all who loved us. But again, that does not mean it will stop the cycle of life for others too.

I would tell my daughter about life and death the way this poet talks about it:

Life means all that it ever meant.
It is the same that it ever was.
There is absolute unbroken continuity.
Why should I be out of mind
Because I am out of sight?
I am but waiting for you.
For an interval.
Somewhere. Very near.
Just around the corner.

(taken from Death is nothing at all- Henry Scott Holland)


What do you say? Till then, keep thinking whether to Tell or Not about Death to your kids……