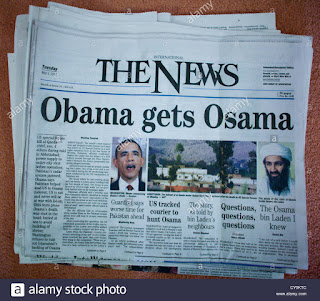 The Master mind who planned the 9/11 Attacks, the man whom  three US Presidents wanted to catch Dead or Alive was killed one fine day in an affluent suburb in Abbottabad, roughly 62 miles away from Islamabad. The long awaited Justice was delivered for all the relatives of people who got killed in the Twin Tower Attack. More than the operation conducted to kill the Enemy number one, what posed a greater difficulty for US government and CIA specially was the burial of Osama Bin Laden’s body. His body had to be buried within 24 hours according to Islamic traditions. US is not the only country to be blamed or held responsible for the Denial of Martyrdom to Bin Laden. It is alleged that Us officials did approach the Saudi Arabian Government for permission to bury Bin Laden’s remains in their country as it was his birthplace. But it is believed that no country wanted a share of Osama’s Fame in any sense. 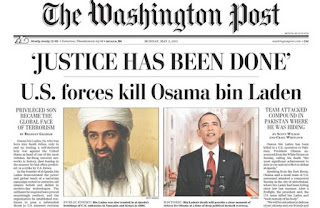 Moreover US also feared that burying the man would mean creating a tomb or monument or simply a place which would convert the Man buried below a Martyr in the eyes of his Followers. They wanted to completely finish his legacy from this world. But they had to think fast even because according to Islamic traditions, a dead body needs a burial within 24 hours of a Muslim’s death.“Bin Laden’s body was flown to the USS Carl Vinson in the North Arabian sea,” a senior defense official said. There, aboard a U.S. warship, officials conducted a traditional Islamic burial ritual. Bin Laden’s body was washed and placed in a white sheet. The preparations took about an hour. He was placed in a weighted bag that, after religious remarks by a military officer, was slipped into the sea about 2 a.m. [Ibid]

Phil Stewart of Reuters wrote: “At the funeral service, his shrouded body was placed in a weighted bag and eased into the north Arabian Sea. Religious remarks were translated into Arabic and read aloud, the U.S. military said. U.S. officials have offered various reasons for the at-sea burial, including the need to bury him within 24 hours according to Islamic custom. Others have said it would prevent bin Laden’s grave from becoming a shrine. [Source: Phil Stewart, Reuters May 3, 2011]

Blast from the past: 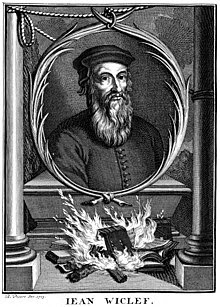 Instances of Denial of Martyrdom before Osama Bin Laden

This was not the first time that some country was thinking of  plans to incorporate Denial of Martyrdom  to anyone.In times of Crusades,both sides were engaged in completely destroying the good/bad deeds of the other side. World history is full of such examples. But one of the best happens to be from the Great Britain. Somewhere after the Medieval Age and during the Renaissance, there were many who questioned the growing influence of Church and the Pope in the lives of common people.

But one of the most important one whose life and death was the best example of Denial of Martyrdom was the one associated with the Lollardy Movement and the translations of Bible in vernacular languages: John Wycliffe.
John Wycliffe:The Morning Star of Renaissance 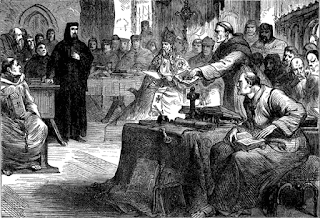 Born in 1330 and popularly known as The Morning Star of Renaissance, Wycliffe studied Theology at the Oxford University. He was appointed as the Master of the Balliol College but he resigned to become the Vicar of Fillingham. In 1374, King Edward III appointed him as a rector of Lutterworth and later made him part of a Papal Deputation at Brussels. Pope Gregory heard about this Bold English Master and issued Five Papal Bulls ordering that Wycliffe be shut in the prison. The stage was being set for events which would eventually lead to the Denial of Martyrdom after his death. Wycliffe managed to stay out of the prison because of his friends in London, but finally he did have to face a trial in England in 1378.    During the trial, Wycliffe openly attacked the authority of the Pope. Everyone feared that this was the end of the bold n beloved Vicar,but luckily for the man, Pope Gregory’s sudden death and new rule in Kingdom led to the dissolution of the trial and he was saved.
John Wycliffe’s beliefs
Wycliffe  believed that the Church had drifted away from its purely spiritual foundations. In reality it had no part to play in the worldly affairs of the state but that was what it had started to indulge in the most. He was strongly critical of the Papal Influence in secular life. He tried to make the religious preaching more accessible to all the common people.
John Wycliffe’s achievements 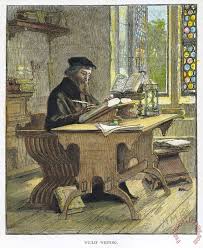 Wycliffe produced a very large body of  literary work, both in Latin and English, a great portion of which has been edited by the Wycliffe Society between the end of the 19th century and the beginning of the 20th century. All his works discussed ideas which were revolutionary for the religious times and beliefs prevalent in those days. For instance, he believed that Christ’s presence in the Eucharist after consecration was doubtful. But his most important work was the translation of Vulgate’s Bible in English (from Latin).For the Renaissance Man,it was an act of extreme courage. It also brought him in direct conflict with the church in Rome. Maybe that’s when deep down the Church of Rome had decided to start thinking of Denial of Martyrdom to John Wycliffe if at all it came to that. There were already a few translations of Bible existing in portions, but the whole Bible was not available in the vernacular. He was the first to undertake the enormous task of translating the complete Bible in vernacular. Although he could not complete the task but his disciples  followed in his footsteps and did complete the task of translating whole Bible.

Events that led to the Denial of Martyrdom

In 1382,Wycliffe was expelled from Oxford University because of his opposition to traditional church doctrines. But after his exclusion,Wycliffe became more determined to translate the religious scriptures into English so that it could be read and understood by the common people. This meant they could start questioning the authority of the Pope And Church, in general Also, this would mean that the Clergy at the Church would have to follow the norms laid out in the Bible in true letter and spirit. This agitated the Pope, the clergy men and the Church officials in general. 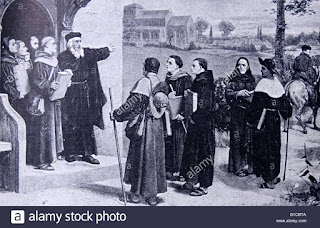 In addition, what actually aggravated the whole situation was the Reform movement called Lollardy based on his teachings and works. The “Lollard” is derived from the Dutch word meaning “to mutter”. It was probably related to the act of reading the religious scriptures aloud which was the style followed by the Lollards. Lollardy is also known as the first noteworthy movement of Heresy in England. Although it was never a very organized movement,as in there was no one prominent Master/Noble/leader whom Lollards followed or listened to. They were simply a group of people: nobles,clergy, academicians or common farmers who were bound by a common set of beliefs. These believes varied in focus and intensity from time to time. As a result they propagated some common ideas which questioned the church’s increasing material interests and its policies of keeping the masses ignorant and away from the scriptures, religious practices and Books like the Bible.
Wycliffe’s health deteriorated in the later years of his life. He probably suffered a stroke while he was attending Mass in his church and three days later died. He was buried at Lutterworth. However in 1415, the Council of Constance gave orders that his body be dug up and thrown into the river. His ashes were thrown in the Swift River in 1428. Predictably, Wycliffe’s Bible was denounced by the Church as an authorized and inaccurate translation. In 141, the Constitution of Oxford made a rule saying any act to translate Bible into English would be considered as Heresy.
Comparing the deaths and Denial of Martyrdom to Osama BIn Laden and John Wycliffe 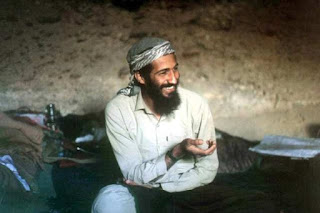 Although one can not say there are any similarities between the reasons which led to Denial of Martyrdom to Osama Bin Laden and John Wycliffe. Except for the method through which the dead bodies were disposed off in both the cases, there is no similarity in the lives or principles of these two warriors. While Osama had taken to spreading Hatred, Fear and Terrorism in the name of Religion; Wycliffe actually wanted to stop all of these and make religion more acceptable to the masses. While many people who were close to Osama from his childhood days agreed to the fact that he was a calm and composed man who was never found fighting or hitting his own siblings. Then how did the man become what he actually became in the later part of his Life, is not a mystery at all. But in case of John Wycliffe his bold and assertive stand about the role of Church in one’s life was way ahead of his times, still it got followers,even in those days. 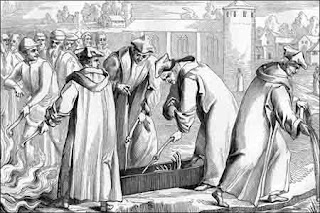 Whether the Denial of Martyrdom and its method was right or wrong is not for me to decide, but what I do understand from these two examples from the Past is that it is not possible to run away from the past and also Human minds blinded with Power, Ambition and Hegemony work in same ways universally. The race to prove one’s supremacy over another’s believes, religion or for that matter the way of life, altogether is not one full of instances of  brotherhood, love or compassion. Instead it is void of all that. But what we forget is the simple rule of Physics as told by Newton……..
Whatever we throw into the soil or water,
Comes back to us…..
Who knows, maybe as love, hatred or fear

Comes back to us…

Because it was always there
Somewhere near us……..