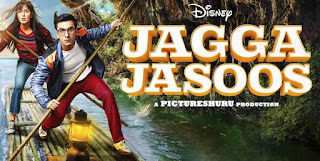 FROM HARDY BOYS TO JAGGA JASOOS
“Did you like watching Jagga Jasoos?” my husband asked my 8 year old daughter and her response made us both roll in laughter.
“Elementary papa. Jagga was not as stiff and grownup like your Poirot or Sherlock. He is a school boy who solves mysteries while he sings. And he has such a smart friend with my name, not boring old men like Watson or Hastings who are always caught unaware by the villain.” says Shruti, my daughter.

Oh and we spent the whole day telling her about our favourite detectives. As a schoolgirl my elder sister introduced me to the teenage sleuth most popular among girls as Nancy Drew. This character created by Carolyn Keene was a fearless girl who would go around solving mysteries in her neighbourhood or at school or when she was on a holiday. She seemed so independent, logical and fearless. We all loved her. But the boys loved the Hardy boys more and every time tried to tell us how easy Nancy’s mysteries were as compared to the Boys.

But both the girls and boys liked the smart journalist Tintin who would go around the world solving mysteries, saving lives of his friends with his dog, Snowy. His friend Captain Haddock; his admirer, the fat singer Madame Castafiore and Thompson and Thompson were also a great source of humour in any adventurous tale. Living in Maharashtra with friends speaking fluent Marathi, we couldn’t miss our local detective who named himself on the lines of James Bond as Faster Phene from the village Fursungi. He was a detective par excellence and always eager to crack mysteries. He seemed closer to heart and home because he went to real places which we knew about and could visualise him when he unearthed mysteries.

During my schooldays I and my sister were lucky to have a Principal who wanted students to choose books for their prizes in extracurricular activities. So a week prior to our Annual Prize Distribution ceremony, he asked the city book sellers to arrange for display of all kinds of books. My sister always helped me to choose a variety of books and one such prized possession of ours happens to be The Mystery at Cooper Beaches.

That was our introduction to the adventures of Sherlock Holmes. We got more interested and next year my sister got The Memoirs of Dr Watson. After reading this one, it took us many years to accept Sir Arthur Conan Doyle as the creator of the famous pair.  For us Sherlock Holmes and Watson were as real as you and me. We felt the various inspectors at Scotland Yard to be as dumb as the Mumbai Police in Bollywood movies which would always arrive at any crime scene after the hero had smashed half of the goons. His peculiar habits such as keeping his pipes in his socks, living in a cluttered room, his love for violin and hatred of women made him seem more than just an imaginary character. We started with: The study in the Scarlet, The Blue Carbuncle and went on to the more intriguing Sign of Four, Speckled Band and the Hound of Baskerville. Mother used to say we learn from the company we keep. We wondered why Watson didn’t learn anything. He wasn’t always as quick as Holmes in making deductions. Still Holmes always took him as an accomplice on his adventures.
One fine day, we met a friend who introduced us to another detective pair of Hercule Poirot and Captain Hastings. Hercule was just the opposite of Sherlock with his immaculate appearance, his polite mannerisms and his love for the fair sex. He had his own way of discovering the truth which was not very clearly told to us by his creator: Agatha Christie. But Hastings was more or less like Dr Watson. He had also gone through the trauma of serving in the Royal Army during the War. Since he was disturbed due to his experience in the war, he too was slow to grasp the evil emotions at play whenever a tragedy struck nearby. And again, they were very close companions: Hercule and Hastings.

Then came this serial on our very own Doordarshan, the only TV channel available in pre- Facebook days in India: Byomkesh Bakshi. We started watching it for Rajat Kapoor, in the beginning. Gradually we became engrossed in his method of solving mysteries. The Bakshi household was as urban Indian as any other household in Indian cities. Bachelor men would be idly sitting on easy chairs discussing everything written in the newspapers over a cup of tea and snacks while the man servant in the house would be running around on war footage. In this

household we had Ajit the docile follower and writer friend of the sleuth and Putiram his servant to add to humour to the tales. We loved him- a detective who wore dhoti, spoke Hindi and was as sharp as any other detective.  It was confirmed: you needed to be a man, a bachelor with a dumb friend to be a successful detective. But how could such boring people attract children to be detectives? Just because of their knowledge and their peculiar habits?

We wondered why there weren’t any grown-up, livelier women pairs of investigators till we saw a movie based on Agatha Christie’s novel: A Mystery at the Vicarage. Here we had an old lady’s disappearance being investigated by another very normal looking grand mama who was initially shown to be busy sitting in a corner knitting her sweater and smiling at everyone passing by. She turns out to be a sharp mind as she logically reads the meaning between each and every character’s dialogues and actions. We had found a match for the male dominated world of detectives. But then the boys were not very happy. They said she was not a real detective. In times of peril, she may get caught herself. Once the villains knew her to be frail and weak, she could be easily kept out of way. Fair enough. And our hunt continued…..

We all wanted somebody who was young, smart and enterprising and living with equally capable friends, not some dumb ghost writers. And then we found them on the Bollywood screens: Bobby and Jagga Jassos.
Here we had somebody as vulnerable as any one of us. Still, they were trying successfully to use their powers of deduction to solve the mystery. They displayed all normal human emotions and still they stood out in a crowd. Their disguises, their songs and their restlessness to achieve their goals: everything was so real, just like us. So, finally here were two individual detectives of modern India dealing with mysteries in an Indian not-so-unfamiliar way.