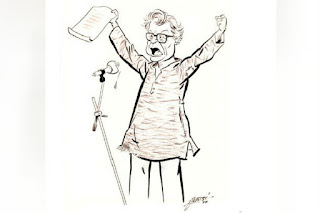 He was the most unlikely Defense Minister. He started his political career with a blast when he won an election against an established rival politician named S K Patil and got christened as George the Giant Killer. His active participation in procurement and use of dynamite for blowing up distinct yet distant organizational infrastructures in order to “open the eyes and ears” of the Indira Gandhi government during the Emergency made him the Angry Young Man of the Opposition. As a result of his “chained poster” people from Muzaffarpur voted for him in large numbers while he was still in prison. 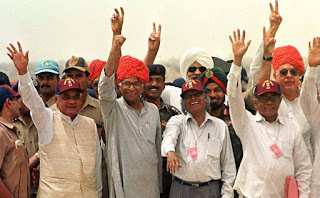 Clad in his khadi Kurta pyjama and Kolhapuri chappals, with his unruly hair and spectacles; he played the part of a trade union leader much better than any of his other offices. He headed many ministries ranging from the Industries to Railways before he became the Defense Minister in the Atal Behari Vajpayee government. The Defense Ministry proved out to be as extraordinary, controversial and exciting portfolio for him  just as his own dynamic persona. Here’s a look at his work during his two terms as the defense minister of India:

1.     Unprecedented Impeachment: The worst blow to the establishment of cordial relations between the civilian bureaucracy and the defense personnel credited to George sahab was the unprecedented impeachment of the Naval Chief: Admiral Vishnu Bhagwat on 30 December 1998. George Fernandes initiated the whole process stating the damage the Chief was doing to the National Security which was clear from his comments on the Sagarika anti-ship missile project, the disclosure of the undercover Operation Leech in the Andaman Islands, violating protocol and communicating directly with the Pakistan High Commission. But another major reason was also his boorish and litigious nature. 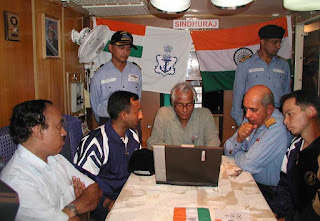 Although George Fernandes managed to lose support from a section of Naval Officers, he won their hearts by becoming the first Defense Minister to spend a night in a submarine. The impeachment was not exactly a victory of the Civilian bureaucracy in MOD, as George always wanted it to be an amicable relation. And that’s why along with the Impeachment came the then transfers of the Defense Secretaries. George was many times asked about his transformation from the Trade Union Leader to the Raksha Mantri and he would say, “I was a trade union leader and now I am the Defense Minister. Both are totally different roles. But I am trying to do my job with my complete sincerity and willpower.”

2.     The Awakening of the MOD Baboos: Most of us know that George sahab became 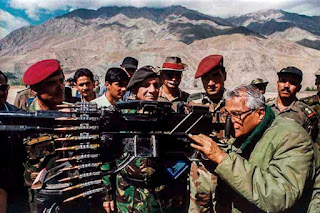 the most popular Defense Minister owing to his 17 visits (during his short 17 months tenure) to the Siachen Glacier to meet the Indian soldiers even at the age of 74 years.  A VIP visit to any station meant extra work for the unit personnel and obviously extra working hours mean no ME time. Still, what kept people praising him was his simplicity while conducting the visits and the follow ups. Every time he went back to MOD he had already thought about ways to satisfy their special needs and requirements. At times, he used to ask the MOD officials to accompany him on these visits so that they became familiar with the harsh living conditions and cleared the files related to procurement of personal gears and arms and ammunition for soldiers at the earliest. 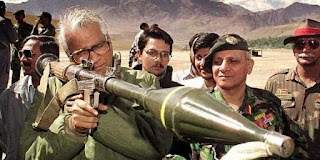 3.     Chedne wale ko Chodenge Nahi: The rebellious streak in his decision making and leadership was visible from his early political days. As a trade union leader and further as an Opposition leader during Emergency, he had not hesitated to resort to violent methods to prove his presence. In a similar way, he proved to the superpowers of the world that India was no more just a spectator but active user of Nuclear power if the planned to restrict us. Call it Stealth or a calculated risk; he used one of the most important principles of war to his advantage when he initiated the second nuclear test in May 1998 at Pokhran. He made sure that Defense Research and Development Organisation and Indian Army worked closely in conducting those five tests that marked India’s entry to the nuclear weapon club. “If a nation’s security is endangered…then there is no question of whether we are able to feed our people or not,” He felt. 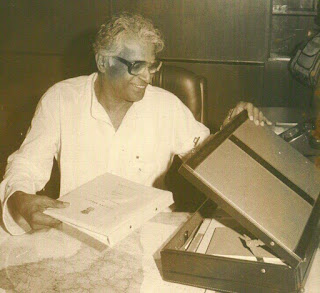 4.     Embarrassing Debacle of Assault: But the opposition could not keep him outside the government and within a short span of seven months he was back in the chair of the Defense Minister when the country needed him to uphold the morale of the country’s armed forces when tensions along the border had intensified. He had then proclaimed “Get your troops out of our soil, or watch them being thrown out.” Further, he went on to suggest “If Pakistan Foreign Minister Sartaj Aziz wants to discuss how the intruders are to leave, we can discuss their safe passage.”

This was again a surprising stand to take in the hour of a war!

Many critics blamed that it was his short-sightedness at not expecting any provocation from Pakistan post-Pokharan attacks and the failures of Military Intelligence that claimed the lives of young, trained officers and soldiers of Indian Army in the Kargil battlefields. What was further shameful was the late arrival of aluminium caskets from US dealers specifically designed to preserve and transport the dead bodies of the soldiers from snow-laden areas and the unnecessary brouhaha created over the Defense Ministry making gains out of the martyrs’ bodies!
5.     Flying or not Coffins come handy: It was a time when there was a lot of criticism of the Russian fighter jet MiG 21 that also earned it the sobriquet of “Flying Coffin” because of high accident rates in the IAF. At an age of 73, he flew in a MiG-21 to take on the growing criticism on. Following his 25 minute sortie in the MiG at Air Force Station Ambala, the IAF breathed little easy. 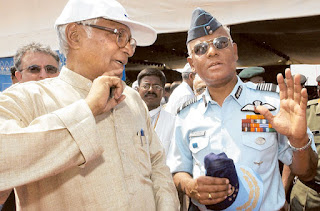 But that was not all. More was to come in the form of the infamous Coffin Gate Scam. But before that, he got involved in the sting operation from two journalists from Tehelka posing as arms dealers, came into his official residence and discussed financial transactions with Jaya Jaitley, his close associate and an office-bearer of the Samata Party. Once again his personal life had been dragged into limelight through a political debacle. George Fernandes was well known for increasing the budget for defense manifolds as compared to his predecessors. As a result, he became an easy target for his opponents and had to resign from the post. 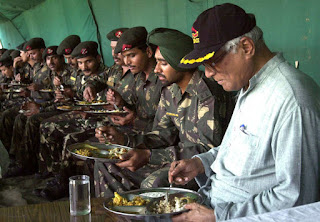 Nobody can interpret George Fernandes and his actions as Defense Minister in isolation. His persona, his allies and friends and the times in which he was alive defined the course of his life. The man who ran away from a seminary stating his hatred for inequality between “fathers” of the same sect, spent nights sleeping on railway stations, bringing the city to a complete halt fighting for the rights of poor railway and taxi-workers rose to become: The leader with mass appeal during the Emergency. The Rebel who propagated violence, the revolutionary Comrade who supported organizations such as LTTE and allegedly asked aid from CIA became the man to support and lead the most disciplined institutions in the country: the Armed Forces. 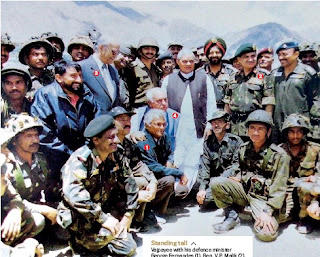 It must be courage and the feeling of camaraderie, of keeping the Country before self which would have prompted the Giant Killer to again and again aim at excellence which brought him back to the role of a Defense Minister. He could have succeeded well as the Minister of Industries, Railways or any other Ministry, but he decided to “Serve the Soldier” even at the cost of personal defamation. With a subtle reminder of how damaging Nuclear Power could be in Hiroshima and Nagasaki through a painting hanging in his office, he went on to enable India and its armed forces in the world with the same Nuclear Power.
RIP George  Fernandes