by Vidula Abhyankar
in IAF
0

EYE IN THE SKY Moving from Man to Machine: Changing Paradigm of Military Decision Making “Never tell a soldier that he does not know the cost of war.” Lt Gen Frank Benson, Eye in the sky The British thriller movie Eye in the Sky written by Guy Hibbert and directed by Gavin Hood is the story of how the moral, ethical and legal implications of drone warfare are tested when a simple capture could have deadly results. Colonel Katherine Powell (played by Helen Mirren) heads up a team who look to identify, follow and eventually capture a terrorist group comprising a British national and her Muslim

husband. The British and American authorities are monitoring the group travelling within Kenya from their respective offices using some very sophisticated “flies” and actual moles on ground. Using a drone, they locate her going to a safe house with a young man, where to their surprise, the terrorists are preparing for a suicide attack. Based on this intel, Col Powell changes the mission to not just physical capture of AL-Hady but to sending in a hellfire missile to kill all present in the safe house. This decision is met with anxiety and apprehension by her superior, Lieutenant General Frank Benson (Alan Rickman) who sits with some Members of Parliament who have basically come to witness the capture. The change of plan finds all the civilian authorities passing the buck until it reaches the level of the British Foreign Secretary James Willett (Iain Glen). Her plan is further complicated by the inhibition shown by the American drone pilot Steve Watts (Aaron Paul) who declines to send in the missile while a little 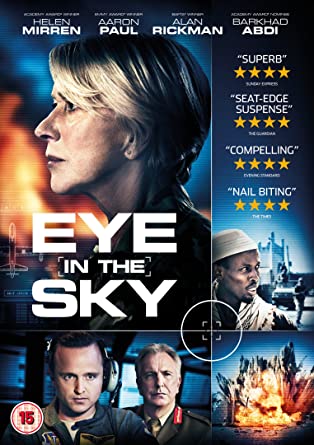 girl remains within the casualty area. As the sides argue about the best move, their moral and legal obligations are tested. The action in the movie takes place at five different locales: Col Powell’s war room: the plan of action is being initiated from here American War room: The drone pilot, his superior and his support staff is here. They are the ones who will execute Col Powell’s plan Field Operatives : Young civilians and Armed military units who are helping Col Powell for physical and virtual interception of the safe house British Conference Room: Lt Gen Frank Benson, Col Powell’s superior and a member of the Defence Committee along with a legal expert and a Member of Parliament (also a lady) who are monitoring and giving an approval to Col Powell’s decisions on the Cabinet level. British Foreign Secretary’s office: Coordinates the efforts with their American counterparts. “We’ve got two suicide bombers inside that house but no one wants to take responsibility for pulling the trigger.” Colonel Katherine Powell  This movie provides us with a short yet nerve-wrecking glimpse of how the future drone warfare requires quick, competitive yet compassionate decision-making from the military as well as civilian leadership. The movie echoes the question time and again “what makes a good kill in a pilot-less or more correctly called a Drone-led attack” through its 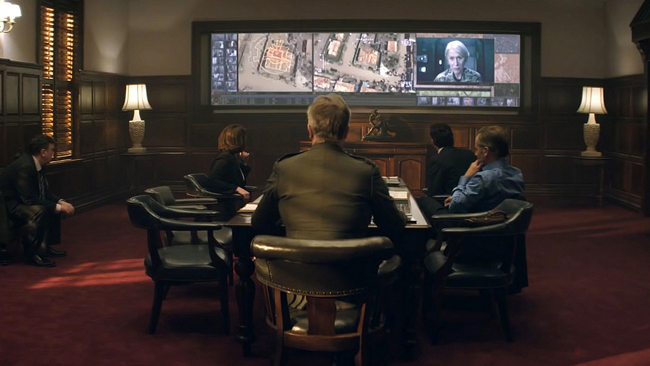 characters. For instance, we find the British Lt Gen (a man) and Colonel (a woman) working in tandem when it comes to quickly changing the aim of the mission from a capture to a kill while on ground, the American pilot (a man) who is their “Eye in the Sky” and his assistant a sergeant (woman) together worried about the well being of the little girl near the area of attack. The senior leadership demonstrates the conviction that goes on with the kind of mission that they are handling: to capture a highly volatile terrorist group. Equally capable are the middle –rank officers as in the pilots and the fighter controllers who got through the Standard Operating Procedures and necessary checks with complete dedication and integrity.  “I am the pilot in command responsible for releasing this weapon. I will fire when this girl is out of the 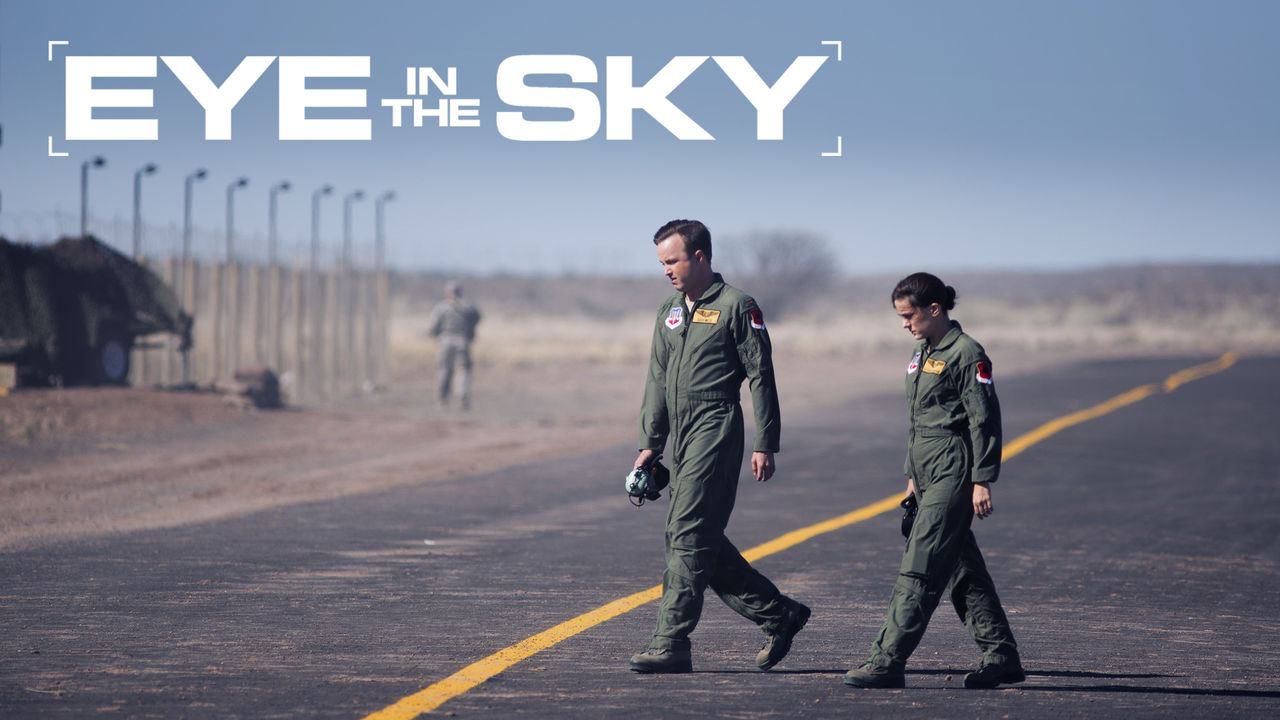 way.”Steve Watts, the Pilot Although the fighter pilot is supposed to be the one with the Killer instinct, it is he who is shown to be full of mercy and compassion for that one human life while on the other hand, the Colonel with her assertion is too trying to kill the terrorists to deter a big human bomb explosion that they are planning. Unlike the compassionate Pilot and his assertive denial to press the “kill” button to his superiors; the Col goes on to strongly yet authoritatively influences her assistant: another Black to estimate the chances of the girl being killed as less than 50% so that she can give the order to kill the terrorists. This way she gets the American to press the “kill” button finally. 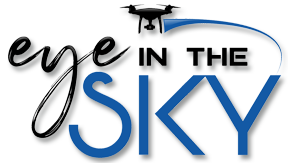 But surprisingly opposite to these military characters are the civilian bureaucracy members who play with their words and simply deny agreeing to convert the mission from capture to a kill. Despite, they being able to see all the efforts being taken by the military teams, starting from the local spies in field who even try to buy the little girl’s bread to persuade her to vanish from the scene; spy who plants a bug at the cost of getting caught by local military, which helps them to discover the big store of explosive vests and weapons inside the safe house and their American counterparts; they simply start questioning the legal, moral and military grounds on which such a decision to kill a young girl can be taken.  “If they kill 80 people, we win the propaganda war. If we kill one child, they do.” After they try to argue on the legality of the mission, their 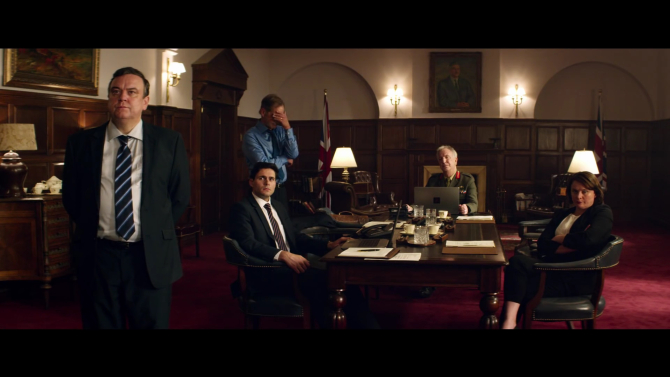 best façade of an argument created to deny the kill is what if such a video would be released in social media over a period of time? They are not worried about the terrorists moving out of the safe house with the explosive body vests on and enter a shopping mall and kill hundreds of civilian population. Their worry is how they can justify the kill of one British National (who has turned into a terrorist) if at all the news is leaked outside in the media. One can see the difference in the way their American counterparts think about the whole matter and are very clear about taking down the target even with the changed perspective keeping in mind the safety and security of the Nation as a whole. The 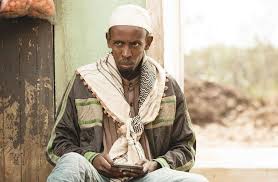 beauty of this movie also lies in how it keeps exploring the different layers in which the future warfare is going to be played and how all these different layers are interwoven with each other. The humans controlling the Net-centric warfare and their humane or otherwise attitudes as well as aptitudes play a decisive role in contemporary warfare. We find the Pilot controlling the drone so humane, unlike a video-gamer or a “killer”. Similarly, we find the civilian leadership blaming the military leadership of forcing them into homicide while they deny accepting their larger responsibility of deterring a “suicide-bomber” attack on civilian populations. While one nation’s leadership is very clear about using power to stop the terrorists, the other nation is still fussing over the legality and moralities of kills. To sum it up, I would only say that the movie shows very clearly the difference in aims of the military leadership who calculate their

each decision minutely and stand to experience its actual effects in life while their civilian counterparts are only concerned about hypothetical diplomatic crisis. The movie’s importance once again, is not as just an excellent piece of art but also an excellent tool to understand the whole process of decision-making in a net-centric warfare. I can’t stop myself from once again quoting the very assertive Colonel Powell: The aim of this exercise would be “Obvious to Anyone Not Trying to Avoid Making a Decision”. P.S. I am happy to share that the website has featured as one of the “Top 10 Indian defence blogs” A big thanks to Webocto and Anuj Agarwal @Feedspot HTTPS://blog.feedspot.com/indian_defence_blogs/

How to teach ELT students to Describe People