While we await the last season of Game of Thrones, days and nights are going to be engaged in discussing next moves of the surviving honourable members of the Stark family. While some spoilers are already speculating the mother of the dragons to play a definite role in Sansa Stark and Jon Snow’s life; Cersei and Arya’s moves will also be worth watching.
While I watched this series from day one, as a homemaker what intrigued me the most was the way the idea of spaces has been visualized whenever all these characters switch homes. While the story begins at the laid back country side castle of the Starks, Winterfell; we find the Lannister brothers and sister being cozy and comfortable in the towers of the castle while Joffrey Barathian is the only one complaining.

Once back in the capital, even Lord Eddard Stark looks comfortable as the King’s Hand. He does miss his home as his wife and sons are there but he adjusts well to his new workplace and home. Same is the case with his daughters, Sansa and Arya, who also seem to fit in the royal chambers of King’s Landing. Arya is a little restless but finds the butcher boy and her dancing master to pass her time learning new tricks with her sword. 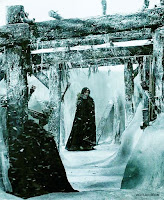 On the other hand,the bastard son of Lord Stark goes to join the Night’s Watch at the Castle Black and guards the Wall in complete cold. The complete void in his life and the lack of solid warmth of family is signified through the long patches of snow and cold winds blowing hard in the face. Till he finds the other brothers, especially Sam with whom he shares the indoor fire.
Far in the desert, the last dragon and his sister, D Targerien, the new Khalisi is struggling to adjust to her wild tribal husband and his equally wild bunch of slaves. Her home is more like a small earthen tent which is lightened with the fire at night. She struggles hard with her dying tribesmen and baby dragons till she reaches the city of Kaath.
As she gathers a big army of slaves freed by her, her home space is shown to be a high rise building and a higher throne in it with nearly no decorated chambers still. Her home space and powerful throne are still examples of the sublimity of a peace-loving yet courageous person. 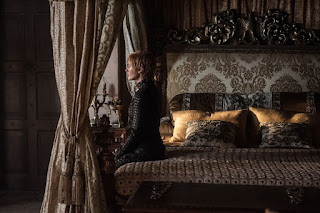 In the consecutive seasons, as the deceit and spying enhances, the play of spaces becomes more interesting as all conversations between key players take place in their bed chambers or in their tents at the battlefields. Little Finger’s lively, brightly decorated plush establishment being the most chosen place for all of them to reveal their secrets.  Such as the conversations between Cersi and Sansa, Sansa and Joffrey, Tammy and his whore and so on.
Extreme emotions of hatred and cruelty of Joffrey towards the Stark family and others are usually shot at the court and larger spaces showing how easily he displays his true character in public. That makes us believe how naturally cruelty comes to him and we start hating him immediately. 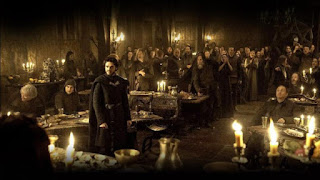 Another example of using crowded, brightly lit public spaces for showing turning points in the story are the venues of the red and velvet Weddings. Oh how marvelously, the merry-making is turned to deaths and dare devilry by them. Look at the use of spaces at the High tables at the weddings and how they play a special role at killing the bridegrooms and showing the never to happen bedding scenes.
I am appalled at how cautiously the makers lead the characters to find solace in love-making at unusual places, ranging from the shocking scene between Cersi and Jamie next to their father’s dead body to the prison chambers of various characters.
I was too shocked myself as a believer about the place they chose to show these scenes but after second thoughts, it all seemed right with the way the characters were thinking. My personal best use of space chosen for such a turning point remains to be the cave where Jon Snow loses his control and virginity and lets his soul melt into the mouth of his beloved Wildling!
Another of my personal best example of showing the struggle and conviction of a character through the space around her is Lady Stark’s journey from Winterfell to the death she meets at Red Wedding. From her ailing son’s bedside to the elder son’s march to take revenge of his father’s death, how courageously her environs change. And as a true lady, she remains as large-hearted as her locale till the last minute.
There is so much that one’s mind catches about spaces and their interplay with the character of the game. But for now, this is just a small way to celebrate the big homes of the game!

Waiting to be appalled again by the Good Homes and spaces of the Thronies in this season!