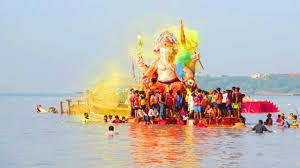 Lord Ganesha, the Lord of Beginnings, the Lord of Knowledge removing the obstacles in the path of obtaining Perfection and Satisfaction. After ten days of festivity,excitement and enjoyment, Lord Ganesh will be immersed today. All through these ten days,I kept wondering what would be the relevance of this Elephant-faced, Pot-bellied, reborn God for the Millennial? The Millennial wants to look good, wear the latest, eat less or probably nothing at all, be absorbed in the phone to such an extent that it becomes his/her world,order an Ola or Uber Taxi if required to be in the virtual world. What would Lord Ganesha who lived on the Kailash Mountain with his Father’s army of Ganas, Bhutas (ghosts) and all kinds of wild Animals and at times wandered to the Jungles in pursuit of Knowledge hold for the Millennial? 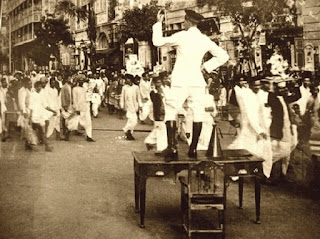 Nearly a century back,when there was no united India, Bal Gangadhar Tilak, popularly known as
Lokmanya Tilak,encouraged the Hindu Brahmins staying in and around the Deccan Plateau to start celebrating ten-days following Ganesh Chaturthi as a public festival. He urged them to gather around an idol of Lord Ganesha in the streets of Mumbai and addressed them about the need to come together and fight for Swarajya (self-government). Ganesha Festival was just a religious tool  then for the Freedom Fighters used to spread the revolutionary thoughts against the British government through religious rituals. That’s when different activities related to the religion started to be used. Special attention was paid to the Artis sung after the Puja/invocation ceremonies, Competitions such as Rangoli,decoration of the Pandals and Haldi-Kumkum for ladies became synonymous with Ganesh Festival.Every day was dedicated to listening to famous orators sharing their thoughts through their Bhajan- Kirtans. Similarly,local Singers,Dancers and folk artists were also patronised by the local Royal families and their programmes were made open for all. 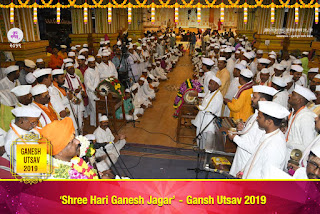 After the Independence, Ganesh Festival did not lose its charm,instead it spread its wings with all castes and sub-castes in the newly formed Maharashtra state and many other neighbouring states started to celebrate the festival with full fervour. Now the meaning of Ganesh Festival changed as it did not remain religious or a patriotic tool. Now it became a means of showing one’s strength to the community. People started to increase the amount of decorations done in the Pandals or where the Ganesh Idol was kept, more number of activities were planned for cross-sections of society,such as rangoli and cookery competitions for the ladies, drawing-painting and outdoor games for the children and of course the Late Night music/dance shows for all. 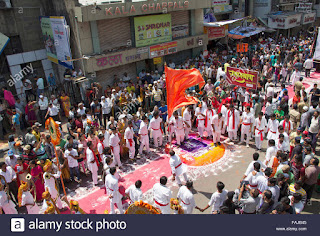 With time,Ganesh festivals became more streamlined as the cradles of local Leadership. Children of younger age- groups would collaborate with the elders and start collecting donations called Vargani(in Marathi) quite a few days before the Festival. The donations would basically decided the size of the idol of Lord Ganesh and the quantum of events that could be held during the Fest. While returning late from work or a movie show, one could find young minds and limbs burning the Parking lights and making loud noises till late. But no one worried as these were the otherwise worthless, unemployed youth of the neighbourhood sweating over the arrangements related to the Ganesh Festival. 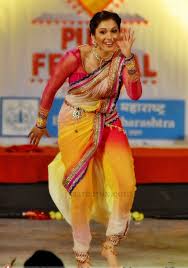 For me, the Ganesh Festival was always associated with Liberation:of my body, soul and my community. It means the same that a Navratri festival means to a Gujrati. For those aroused by the opium called Religion,there was a feast everywhere you went. Some one was reciting the Atharvasheersh hundred times in chorus while at some other place there was a competition of Aartis going on. For the ones aroused by the opposite sex, there were these night walks  that all of us used to take on to see the electrifying lighting and decoration done by every Housing Society/ Group inside their Pandals.
Oh it used to look like human waves walking hand-in hand towards Lord Ganesha. And very few untowardly incidents, except for a few pick pocketers,chain snatchers or Chappal-chors.(Slipper Thieves nearby the entrances of the Temples/Pandals). One would roam around he whole night from one Pandal to another and then finally end up going to a friend’s place and waking his/her parents for a piping hot cup of tea and Poha (puffed rice flakes). This I found was a liberating exercise as all of us, the teenagers, the so-called perverts and the elders in the society got ready for facing whatever could happen due to such interactions. Years after years the same traditions continue still.Yes there are some corruptions as loud Bollywood numbers replace Bismillah Khan’s Shehnai and Bhimsen Joshi’s Bhairavi. But tell me when was art supposed to be understood by all? 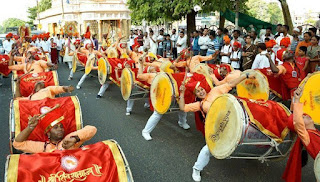 What is actually worth asking is will the Millennial take all this trouble? The recent attempts at making Lord Ganesha’s idols eco-friendly, trying to make memes,cartoons and animations about the city’s old Ganesh Mandals and the interest shown by people in reviving the old practices such as playing the Dhol, being careful about the cleanliness of public places during Ganesh Festival and trying to include new flavours of Beti Bachao,  Beti Padhao,Avengers and Chandrayaan II in the Pandals shows maybe the Millennial will not find the Ganesh festival a burden yet.
On this Anant Chaturdashi ( Immersion Day) let’s hope the Millennial learns to leave no stone unturned in the pursuit of Knowledge that Lord Ganesha gifted us with this year and promise ourselves to greet Lord Ganesha with some more perfection next year.
Ganapati Bappa Moraya!
Agle Baras Tu Jaldi Aa!