Lord Ganesha- The God of Beginnings

by Sqn Ldr Vidula Abhyankar Retd
in Life and Travel
82 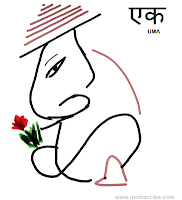 (the Deity who is hailed as the chief of the celestial hosts (Ganapati) here is called Brahmanaspati.
the elephant-faced God as Kavinkavinam,
the Seer of seers, Ganapati being the God of wisdom par excellence,
and Jyeshtarajam, the Vinayaka commanding precedence over others) 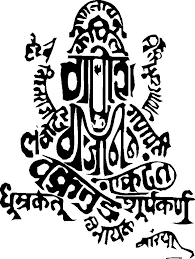 Every Hindu religious function takes place with invoking the blessings of Lord Ganesha. Why so?We have many powerful and impressive Gods such as Ram, Srikrishna or Vishnu, then why is this pot-bellied,elephant faced God preferred as the God of Beginnings in Hindu Mythology?Today,  I will tell you the story behind this. This story is also linked with the legend about the birth of Lord Ganesha.(read my blog on the Birth of Lord Ganesha as depicted in various mythological scriptures on my web site: vidulaabhyankar.blogspot.com). On a lighter note,the feminists would be happy to hear that the origin of this practice of Lord Ganesha being made the God of Beginnings is a woman; Parvati as  the Shakti/Kali. Red the story and then try to know what happens when you invite the wrath of Shakti, knowingly or unknowingly. 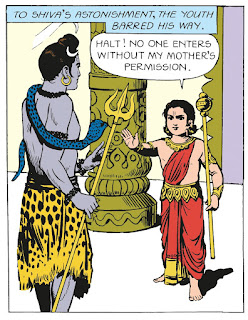 According to the old legend related to the birth of Lord Ganesha, Lord Shiva,  was away at a war. His wife Parvati was fed up of not having anyone to guard her door or act as her body guard as all the Bhootganas from Shiva’s army were away at the war. She decided to create her own Bodyguard. Hence she created Lord Ganesha out of the her body sweat and sandalwood paste that she used for her bath and breathed life into the figure. She then set him to stand guard at her door and instructed him not to let anyone enter. In the meantime, Lord Shiva returned from the battle but as Lord Ganesha did not know him,he stopped Shiva from entering Parvati’s chamber. Shiva, enraged by Lord Ganesha’s arrogance, drew his trident and cut off Lord Ganesha‘s head. Parvati emerged to find Lord Ganesha lying on the ground. She started crying. She begged Shiva to bring Lord Ganesha back to life.
But when she saw the delay in Shiva’s actions she flew into a rage. She took on the form of the Shakti/Goddess Kali and threatened destruction of the three worlds of Heaven, Earth and the subterranean earth.  Seeing her in this mood, the other Gods were afraid and requested Shiva to pacify her. Lord Shiva in an attempt to pacify her, sent out his ganas, to find the first living thing, cut off his head and bring it quickly. The first living thing they came across was a royal elephant grazing in the forest. So they chopped his head and presented it to Lord Shiva. Lord Shiva placed it on the trunk of Parvati’s son and breathed life into him. Parvati was overjoyed and embraced her son, the elephant-headed boy whom Shiva named Ganesha, the lord of his ganas. 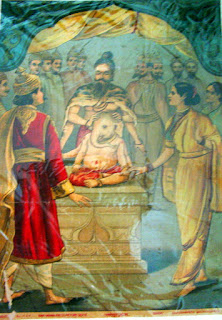 Parvati was still upset so Lord Shiva announced that hence forth everyone needed to worship Lord Ganesha before any other form of God whenever they were to start any auspicious work,be it a Pooja, War or mere Meditation. Only then would their obstacles pass. Parvati was definitely happy with this boon bestowed on Lord Ganesha by her husband but what pleased Parvati further was that this rule was applicable to Lord Shiva too. More about that legend later.
That’s all for today, I will be back with another legend related to Lord Ganesha tomorrow.
Till then, invoke the blessings of Lord Ganesha; the God of beginnings and prepare for the visit of Gauri.