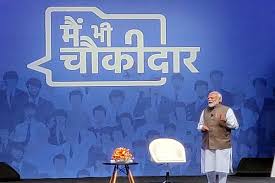 The campaigning, canvassing and opinion polls following the General Elections 2019 have been unprecedented for political and social observers in India and abroad in many ways. And by that I do not mean the chowkidar fan followings or last minute coalitions. I would like to draw the attention of uninitiated art lovers to how the art of movie-making has been turned into a politically vulnerable target.

I will illustrate my point through pondering over “the greatest personal contribution of an acclaimed director to the Indian film industry”, his two daughters Pooja Bhatt and Alia Bhatt and their works. I take back the readers to one of his movies starring Pooja Bhatt: Zakhm. The movie revolves around a Muslim girl falling in love and having an extra marital affair with a Hindu Music Director in the backdrop of religious riots. After completion when the movie went for getting a nod from the Censor Board, the director was told to replace the saffron flags with black colour, if it was to be released. Of course, with great difficulty the director made the changes and then the movie went on to win a National Award.
I was reminded of this incident when I recently saw the performance of Pooja Bhatt’s younger sibling Alia in the Karan Johar produced multi-starrer KALANK. The movie remains to be “bland” recreation of personal struggles of some individuals in the Pre-Partition era. But what attracted my attention was the subtle use of religious symbols to yield political religious gains! Let us look at some religious aspects of the cast: A Hindu family head with a daughter-in-law falling in love with his own Muslim Bastard from the most popular Muslim Nautch-girl turned Music teacher. 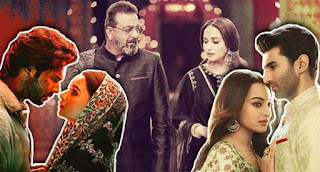 The Bastard being killed by his own Muslim friends while saving his own Hindu step-brother and his wife, with whom he is in love. Again here in Husnabad, supposedly a Muslim dominated city close to Lahore, the antagonists use RED or seemingly Orange flags while protesting against the preachers of One Nation theory! What is more surprising is in times of difficulty, the Hindu patriarch “runs away” from the burning town to Amritsar while the Muslim Nautch girl wants to remain back in her “KOTHA” to save a dozen of her Hindu disciples but refuses to keep two Hindu protagonists saying their presence will be quickly found out in a Muslim dominated area! And at the end of the narrative, the daughter-in-law asking the viewers to judge themselves whether her infidelity remains to be a “KALANK” or “ETERNAL LOVE”!

Attempts to regulate what the public sees are frequently inspired by religious beliefs. And that’s why we have always seen in Karan Johar movies such as Kuch Kuch Hota Hai, Kabhi Khushi Kabhi Gam, there is a Hindu protagonist family making friends with the Muslim peers such as Rifat bi and Abdul Mias. Time and again we were made to believe that not all was wrong between Hindus and Muslims. But, many reviewers are calling Kalank one an utter waste of an extraordinary cast, crew and budget! So is Karan Johar such a fool to waste his money over a mediocre narrative or is there a dearth of original movie-tellers or is it something else? 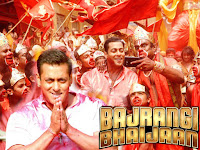 In the opportune times of General Elections, nothing is a waste. Controlling the use of religious symbols forms a rather small proportion of the material gains that religious groups seek to regulate. Religion, after all, is not just about a particular story of creators and messiahs; it is also about regulating how life is lived. So, in today’s times when movies such as Bajrangi Bhaijaan, RAW or the biopic on Prime Minister Modi are trying to change the complete narrative of religious believes in the country, how could Karan Johar leave his forte of Indian Secularism! 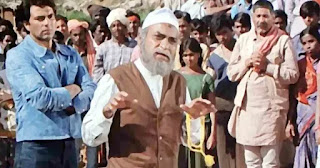 But why blame Karan Johar alone, there have always been attempts to exploit the religious images in Indian mainstream cinema in the past too. Symbols can be potent political soldiers that can mobilize constituencies and inspire them to go to battle for what are always, ultimately, political goals: the pursuit of social and cultural hegemony.  Those savvy enough to exploit this can mobilize their constituencies by interpreting the image as a deliberate attack on their values and beliefs. Remember the most popular Bollywood bonanza Sholay where again we have the blind Muslim old man’s death being revenged by the Hindu Angry young men played by Amitabh bachan and Dharmender. 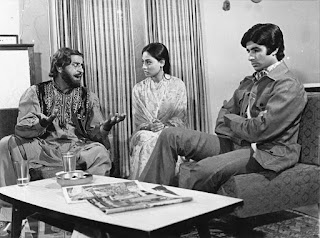 An image is unlike a verbal statement because its meaning is open for multiple interpretations. And those who deal in religious symbols know that better than anyone. Similar is the role of Pran in another Amitabh Bachan starrer Zanzeer where the directors tried to establish and celebrate the then Indian government’s idea of secularism.The tactics may vary with local conditions, the strategy remains the same: attribute a simple and maximally offensive intention (such as in case of Kalank using the Pre-Partition backdrop) to an image, a film, play or artwork and use it to trigger long standing grievances (the Partition woes of Indian Diaspora), while also mobilizing and radicalizing your constituency by creating the impression that they are engaged in a war (here, the personal revenge) and that their most cherished values (of loving and losing their dear ones) are under attack. 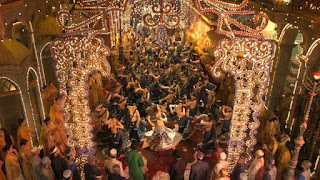 Political power battles find both expression and additional fuel in attacks on symbolic objects. It is again the fallacy of creative cultural wars that comes to foreplay in Kalank when I feel the director fails to impress us because of the tussle between which religious beliefs to please keeping in mind the present political environment in the country. That’s why in case of Kalank, director keeps the fair sex in the audience mesmerized with the dances, costumes and musical/ other visual treats; while he succeeds in mobilizing the anger of his religiously and politically inclined fund-raisers.
We find many examples in History when images were destroyed on a massive scale in an effort to eradicate the dangerous symbolism they contain. Such destructions have invariably been accompanied by shifts in political and religious power. Before the Taliban blew up the images of the Buddha in Bamiyan Valley in 2001, we have our own examples from the times of Emergency in India when all critical art works such as films, books were totally destroyed by the Indira Gandhi led Congress Government. 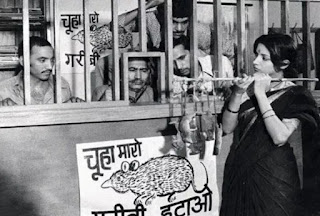 That’s how many of us are not even aware that Shabana Azmi played a lead role in the most controversial ‘Kissa Kursi Ka” and Kishore Kumar’s songs could not be heard on AIR for a long time. Moving back to the present, in Kalank we find the climax revolving around the jam-packed train leaving for Amritsar from Lahore. The director again subtly tries to overrule the massacres that took place in the Pre-Partition times by showing a complete mob of 100 armed Muslims trying to kill none other than just one family! They spare the other travellers and focus only on these three protagonists, which is really unbelievable! 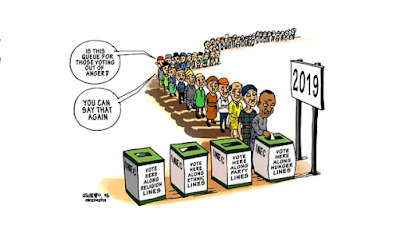 Since the late 1980s, rhetoric of offense focusing on the use of religious symbols has been used to mobilize religious constituencies. In today’s world, Indian media seems to be responding – or perhaps over-reacting – to a radically new world situation, where communications are instantaneous, but where cultural and political differences are still enormous. People have started acknowledging their political or religious point of views as extreme as Right or Left rather than hiding them under the symbolism of the umbrella term of Secularism. But Karan Johar can’t still decide and I think it is this indecisiveness that leads to mixed symbolism and the lack of any chemistry between the Balrajs/Devs/ Zaffarbhai and the Satyas/Roops of Kalank.
But no worries as we all know that this is not the last time that we play this interesting and multi-layered Game of Thrones in India! or as they say in India: Kissa Kursi Ka!
Baki Sab First Class Hai!

In Celebration of Seasonal Changes