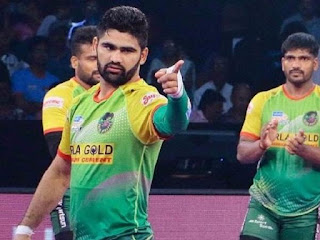 So the fun has started on the Kabbaddi mats for season 7. All the teams are ready to play with every other team twice before they make it to the final play-offs. So it’s going to be a long season and fans are going to love it. The first day of the season started with the host team: Telugu Titans facing U Mumba proved that the season is going to be great fun. Watching Sidharth Desai the star raider of U Mumba play against his last season’s team and coach was interesting. His presence in the team has may be filled in the gap that was created by  Rahul Chaudhary who has shifted further south to Tamil Thalaivas. Although U Mumba won their first match easily, it was not such an easy win for the champions of last season Bengluru Bulls in the second match played against Patna Pirates.
It seemed again this time that Patana Pirates have tried to get the team along by not including any star raiders but sticking to their darling Dubki King and Record Breaker Pardeep Narwal. Although they have added new faces from Iran and the Korean Killer Jang Kun Lee. This makes their weak defence and second line of defense strong as now they don’t have to depend only on the raids of Pardeep Narwal for making points. 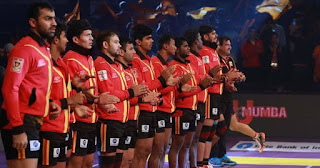 With every season, the teams come prepared with appropriate strategies to tackle the star raiders from the other teams. That’s what even Patna Pirates tried successfully when they managed to keep the star Raider from Bengaluru Bulls outside the mat for nearly 14 minutes in the first half. But that did not stop Bengluru Bulls from coming back in the last five minutes. Bengluru Bulls avoided from giving any Super Tackles or Super Raid points to Patana Pirates in the last few raids. As a result, they could not overcome the gap of 02 points and lost with a score of 32 to Bulls 34 points.
What an eventful first day it was.Let’s see what hapens tonight when there will be a repeat of the finals of last season when Gujarat fortune Giants meets Bengluru Bulls and Telugu Titans face Tamil Thalaivas.