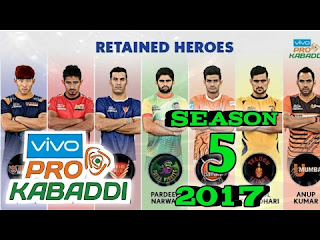 What an exciting weekend it must have been for all those living in Hyderabad and especially if you are nearby Gachibowli Stadium. A chance to click selfies with Rana, Sachin Tendulkar, Ronnie Screwwala and the Bacchans. And of course, hours of most spectacular performance by the home team Telugu Titans and the others. For them the season started with not so easy to win match with the Tamil Thalaivas. Rahul Chaudhary, the captain and star raider of the Titans, found it a little difficult taking Panga with their defenders. They succeeded in making him sit on the bench for good amount of time in the first half itself. Still, you need to admire his guts and decisions. Still we could see his experience count in decisive moments when he made Nilesh Salunke (raider) and young Vishal (defender) play their natural game. They did win but that pressure was visible in their eyes till the second half. Although the Tamil Thalaivas lost their first match, they deserve applause too. They played as a team and did not buckle down under pressure even in do-or-die raids. They have announced their arrival and Sachin Tendulkar will be happy to see his chosen ones playing well in their very first.
However, the match that was a real struggle for our Champ, Rahul Chaudhary was the one on the next day against the defending champions- Patna Pirates led by Pardeep Narwal. A word about this team before we discuss yesterday’s match. You might have observed there are practically no star performers in this team. If you try to recollect any players from last season, you may recall Pardeep and Mondal. This time it’s just Pardeep Narwal and others are all youngsters- strugglers, unknown names but extremely strong as a team. 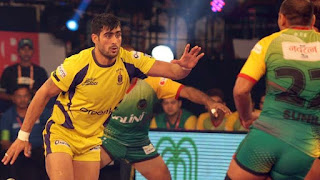 Yesterday’s match was a fine example to prove that TEAMS ALWAYS WIN OVER INDIVIDUALS. Rahul Chaudhary was all set to make a new record of being the first to score 500 points in PKL. But, that golden moment was not to come, at least yesterday. Every time, he came to raid, the crowd got up and started chanting his name. But the Pirates stood confidently waiting to drag him back and shatter his dream. They managed to send him on the bench twice in the first half and twice in the second half. He was lucky once when the Pirates defenders unintentionally pulled his shirt and were given a foul. But that did not stop them from scoring. It was sad to see him err. On the other hand, Pardeep Narwal displayed the same cool mature attitude throughout the game. Even when his team was left to two players in the first half, they managed to avoid getting an All-Out. Instead he got them three points in a smart Super Raid. It was a joy to see him emerge like a tiger in the second half. He controlled the pace and moves of the game. His efforts were perfectly timed with the coach’s smart interventions. When Rahul Chaudhary was struggling to score the last point for his record, the coach took a strategic Time-Out. His instruction to the team: POINT NAHI DENA HAI. He knew they were winning, but he ensured the other team doesn’t get even a single point for their defeat with a margin of more than 8 points. Also, he knew what a Confidence breaking measure it would be for the players if Rahul Chaudhary got his one last point. The Home ground advantage surely turned sour for the spectators with this smart professional’s coaching skills. 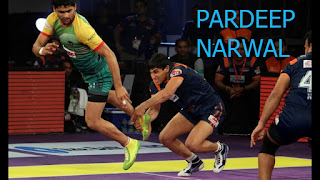 But the whole limelight of yesterday’s performances was stolen by the smiling Irani MEERAJ SHEYKH. What sportsmanship he displayed on the ground during his match with Jaipur Pink Panthers. Manjeet Chillar and his star studded team were so sulky throughout the match that I am sure they didn’t enjoy a single raid themselves. They couldn’t score points. Not a single super tackle or super raid. While Meeraj with his defenders and raiders again proved the importance of team spirit. Manjeet with all his strategic know-how of techniques and with his capable players like Jaiveer too couldn’t add to the score as their opponents did.  Dabangg Delhi lovers will have a lot to talk about their cute ever smiling captain. 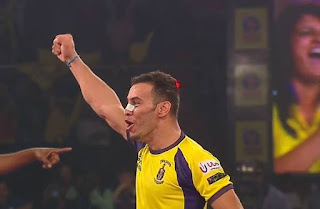 One thing that Kabaddi lovers are going to miss this season is the KABADDI EVES. But more about them next time.Let’s hope Rahul Chaudhary crosses over 499 and achieves that one last point tonight. 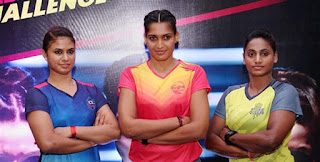