“A picture can convey thousands of thoughts, feelings and emotions what no other means of communication can do.”
All of us associated with the Education sector in any capacity would have visited such colourful, vibrant and lively classrooms at some point of time in our lives. I had this opportunity when I used to visit the Air Force School at AFA, Hyderabad. It was a Play school with many sections of Lower and Upper Kinder Garten. Till then I had never thanked Madame Montessori as I realised the play schools to be the best and easiest to prepare for visits of dignitaries and officials from higher formations. No questions about financial viability or performance of students in  Board exams to worry about. Clean the classrooms, get some fancy, colourful furniture, paint the walls with cartoons and make some equally colourful presentations and the work is done. Students could be themselves, their mistakes and clumsiness made them adorable. You could breathe a sigh of relief as the dignitaries wrote their remarks in the Visitors’ Books. I had never taken the classroom walls more seriously than this.As a matter of fact, with minimum support from the MES, the walls of the school building and all of its fittings seemed nothing more than a liability.
And then I landed at Air Force Station Pathankot which had a perfectly well maintained senior secondary school with a permanent building. The school had most of the necessary infrastructure and it was being periodically well-maintained by the MES.I decided this was the perfect Air Force School to enroll my daughter in pre primary class. Initially my daughter loved the colourful walls but with time the walls faded in the background as she immersed herself in the textbooks and worksheets.That was the time I realised how much time a child was spending looking at sometimes too colourful or otherwise too morose classroom walls. I couldn’t be happier when as part of one of the co-curricular activities in the school, the Principal suggested use of a secluded patch of the boundary wall for a Graffiti (wall- painting) competition. My daughter was once again very happy with the new colours on the wall. As a matter of fact, the students had performed so well that the same became our wall of fame during visits/inspections.
But somehow, my Fauji mind wanted to see some uniformity and discipline in the rebellious colourful strokes of the students. I mooted an idea of painting all the corridor walls in blue and white pattern based on the Air Force Blue. Since white colour and students don’t go well together, the Safai Karmcharis were prompt to debate its utility. So we decided to fill the corridors with huge posters of Aircraft and other information related to IAF. This way we could create an awareness to join IAF amongst the students too. Some thoughts and paintings of cartoons and animals here and there and I felt the work was done.
One fine day, while I was going around the primary wing of the school, I realised what futile effort it was. Since the teachers were worried about the maintenance of the posters not a single child was allowed to touch them or use them. Instead all the posters were taken off the walls and well-preserved in the staff room. The thoughts and quotes were painted at such heights that no child would even notice them.
To quote Hercule Poirot, for the first time as a Parent and an Administrator I realised how imbecile the Educator in me had been. I had simply ignored the fact that the school was meant to make the whole process of learning enjoyable. Everything else would fall in place if the administrator in me worked towards this. That was the time I started studying about : Building As A Learning Aid (BaLa) an art advocated by a couple in Gujarat- Preeti and Kabir Vajpayi who used local knowledge to create conducive and economically viable experience for students of rural schools. Their efforts started to get noticed when many parents removed their children from posh, fancy private schools and put them in the government schools. 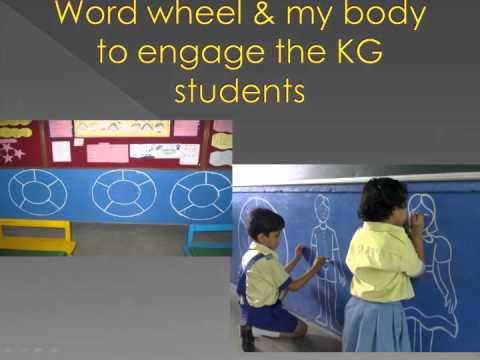 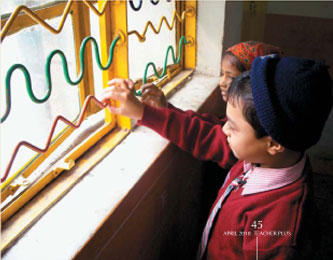 1.  BaLa is not equal to painting the walls with colourful pictures. It has a scientific reason and approach behind it.
2. It’s use is not restricted to primary classes.
3. It can include not only the walls but also the windows, the hedges, the doors and stairs. In short, every structure that is within the child’s reach in a school campus. Creativity at its best.
4. All government schools in Karnataka, Himachal Pradesh, New Delhi,Chandigarh have used it to benefit their students.
5. An indirect yet impressive way of assisting the students belonging to marginalised sections of society to the mainstream.
6. Work services and funds for such building construction and other work are also looked after by the governments and school administration.
7. It’s use helps the students to bridge the gap between the theories of textbooks and its application in reality.
8. It acts as an added facilitator in schools with less or untrained staff. In fact, it can actually reduce the errors caused by faulty delivery of the teachers.
9. It makes the classroom and school environment more meaningful, lively and interactive for the students.
10. It helps to inculcate certain abstract ideas and competencies in the young minds.

Its benefits are many, but it would be worthwhile to note the main challenges it poses for the administrators  as well as the educators in any institution:

1. It means an added expenditure and earmarking of funds for durable paints, other tools and painters.
2. Some structures need to be rectified to become appropriate for the students’ daily use such as windows, doors and /or staircases.
3. The authenticity, relevance and validity of the content needs to checked/amended time and again.
4. The manpower to be dedicated to design, plan and execute the paintings at various places will not be available for any other work.
5. Last but not the least, trying to make the effort an everlasting one. 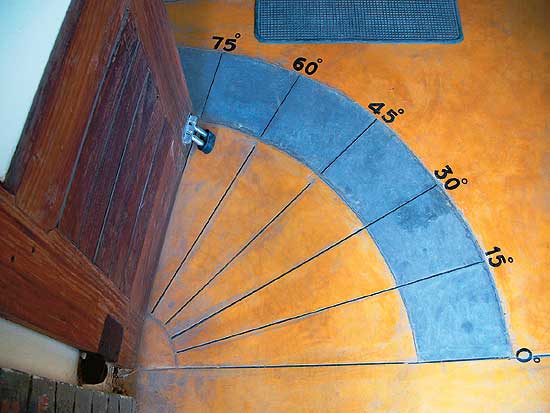 Although these challenges may deter some administrators to apply the concept in their schools, but one can find solutions to all theses problems by using the triangle constructively. By this I am referring to the triangle created by the students-teachers and parents committees of the school. I always found support from my students and teachers for all my new initiatives. Once I was able to convince them about the importance of an action, they were my mouthpiece who convinced the parents as well as other members of the society. Once in a while, some generous parents were successful in getting sponsors from societies involved in educational philanthropy. 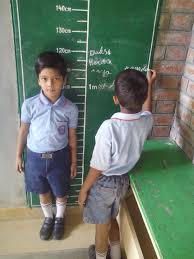 As a result, the boring water coolers in the corridor became interesting points for tiny tots to check their height. The long corridors where students of higher classes left their dirty footprints earlier, now taught them about the dimensions of various sports fields. The doors which they were eager to bang earlier were kept open while calculating various angles and diameters.
It also turned out to be a way to lead the students to learn themselves. The brighter students used it to further to educate their buddies in the classroom while the teachers could give their throats some relief as the students enjoyed themselves in the corridors and open spaces.I found BaLa a very effective tool to standardise learning outcomes in a heterogeneous classrooms of Air Force Schools, especially in the primary and middle sections.
My association with Air Force School Pathankot was too short-lived and so were my experiments with using BaLa at the school. But as a Resource Person at RIE for the In service courses for teachers, I got further opportunity to train the JBT teachers of government schools of Chandigarh in implementing BaLa in their schools. And during a recent visit to Pathankot after the much dreaded Terrorist attack, I was once again reminded of the relevancy of this concept. As a result of the present Geo-political situation and increasing use of unconventional methods of assault, Air Force Schools in such sectors are losing their clientele day by day. This drop in number of admissions is directly related to the drop in its income, recruitment of capable staff members and performances  in higher classes too. Use of BaLa in Air Force Schools could lead to creation of student friendly, educative and interactive environment in otherwise morose residential areas. The fear factor and the anxiety of younger minds in such situations could be easily diverted and channelised to ignite the young minds.