by Sqn Ldr Vidula Abhyankar Retd
in Others
442

0
SHARES
35
VIEWS
Share on FacebookShare on Twitter
Is it a Dance of Democracy or Majority’s Blood Bath? 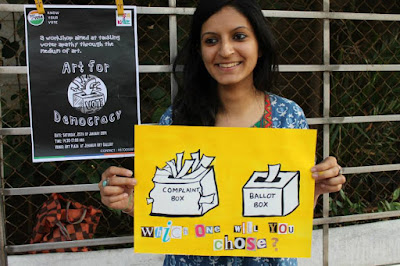 Characters, ideas and events described in a fiction appeal to be so true at times that you start living with them. When my sister introduced me to Jeffrey Archer’s trilogy revolving around Elizabeth Kane, I was elated. It felt as if this was the person I wanted to look like, think like and act like. The Prodigal Daughter was so real, like us and impressive when she fought and succeeded in all her endeavours: Fight for her school Council, her chain of Hotels and clothing stores and finally, the hot spot of American President.
Then when I started looking after a Senior Secondary Air Force School in the capacity of its Executive Director, I introduced the same concept of Elections for the Primary wing of the school. It was an experiment in the beginning to assess whether students could be taught the life skill of decision-making through this exercise.  All the students of a class/standard were told to prepare a one minute speech about why they would want to be the class monitor: starting from class/standard I- V. They would then vote amongst themselves to choose the monitor for their class. Once this was done, then each class would send their monitor to choose the members of the student council for the primary wing. The suitable monitors would then contest for the post of Head Boy and Head Girl of the Primary Wing. Here, these students would get to promote themselves in the morning assembly and once in a day speech in one class every day for some time. Once all this was over, all the students of the primary wing would decide and vote for their Head Boy/ Girl. The ones with maximum votes would win. And I realised it did work. The students who contested tried to express themselves and the ones who voted tried to make up their mind and decide something. We were happy our experiment was working fine.
Until during a visit from some senior officers from higher formations, the Head Mistress made a mention of this as one of the innovative practices started to inculcate life skills among the students. Immediately the officer said “No, no elections. They invite only Blood Bath and nothing else. Think of something else. These children have a lot of opportunities to vote and elect. Leave them alone. Let them enjoy their innocence and ignorance.”

Recently, I read about Mumbai University’s decision to re start the process of elections for Students Councils after a gap of nearly 25 years. They made it very clear that only those students who possess  some academic caliber and no academic arrears such as backlogs and less attendance will be allowed to fight for the spots on Students’ Councils. Today again when the Punjab University students go for voting for their new Students’ Council, social media walls/pages, radio and the local editions of newspapers, warn us about not using the roads leading to the University, unless we are students and voting today. Newspapers report about 900 police personnel who are detailed for performing security duties and to ensure that the elections take place smoothly. Nothing has changed from the days when my generation went to vote for our Students’ Councils. The same BLOOD BATH in the name of Dance of Democracy continues. 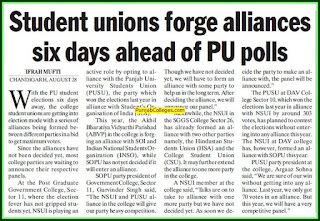 Dance of Democracy: In Indian Universities, the interests of students are safeguarded and their concerns voiced through the Student Councils. In some Universities there are elections which take place through which the representatives of Student Councils are chosen. The students are affiliated to many students’ parties such as: Students of India (SOI), University specific Student Unions (PUSU, DUSU, HIMSU and so on), Akhil Bharatiya Vidyarthi Parishad (ABVP), National Students Organisation (NSO), National Students Union of India (NSUI) and so on. They chose their own representatives whom they want to head the University Students’ Council. It is said that these parties are affiliated (and hence funded by/) to the National political parties and student leaders who are said to perform well are picked up to represent those parties on national arena. There are many examples of such student leaders in Indian political history who have become stalwarts of National Parties such as Sheikh Hasina, Mary Robinson, Lalu Prasad Yadav, Nitiesh Kumar, to name a few. 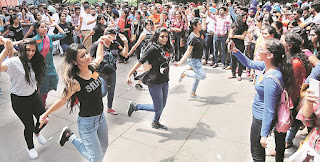 Most of these elected representatives are such students who have hardly any academic research interests. They achieve the minimum essential requirements necessary to fight the elections. Their complete focus is towards enhancing their party’s and its beneficiaries’ popularity amongst students. Their identity is known on the campus only during the campaigning days. The rallies conducted to show their might and the pamphlets spoiling the walls of the University Campus are the only evidence that they exist in the University. Some parties do take the effort to address the students in their classrooms and arrange for some Night activities such as Rock Shows, free buffet dinners at Student Cafeterias and the recent trend: Flash mobs, trip to hills and drinks.
Why do we need to show it off through this waste of resources? Why don’t we just do our duties and let our work speak for us? Alright we may want to publicise and draw world’s attention and finances towards our cause but why not do it through some really peaceful yet impressive methods, say debate, discussions, visual/performing arts or mere academic projects? Why should there be such political interests at stake, always?
While in some other universities, the Students Council is made up of selected representatives of each stream/ faculty. The student representatives at such Councils are chosen on the basis of academic merit and individual performance in previous academic year. I remember during my stay at Pune University during my graduation and post-graduation, many of my friends who were on the Students Council used to complain how boring, long and ineffective these meetings with the University authorities used to be. 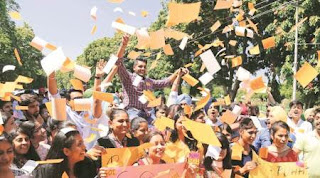 BLOOD BATH: While we were in college, there had been an attempt to murder our Principal on campus. On further enquiry by police it was found that he had been stabbed by two unidentified youth who were probably roaming on campus to neutralize some students from opponent Students Parties. From that year all student elections were impeached with immediate effect. It was decided to hold no elections for individual colleges and the University Students council was chosen on the basis of merit from the toppers of each college/ faculty. We found it convenient, being the peace-loving, studious types of students. Now when I read and hear about students protesting in FTII, JNU, HU and many other places, I find it to be a much better solution to the situation.
SHADES OF GREY: But life isn’t as easy in India as I realise individual performance, governance and development doesn’t go hand in hand in India.  Suddenly you realise the studious type of students (including me) are not interested in the general well-being of the students community. In fact, they are least interested as they are only fighting a war with their own ambitions. On the other hand, the so-called elected students are equally bad. They are like unguided missiles that hit on unguarded targets just out of sheer ignorance/ curiosity or to add spice to life. And there is a lot of spice in their normal life. Generally, they belong to the uppermost or lowest strata of society, so in both the cases the parents are really not interested in their ward’s academic/ moral development. The only reason for electing the students belonging to a particular Student Party year after year in my sister’s college was because they would do so much of damage to the college property in tricky testing times that the college had to declare an official holiday quoting some or the other reason. So the party was really popular as the holiday-giver.
With changing times and generations in Punjab, I have seen and read about so much of damage these parties do to show their might and fan following that they undertake road shows on noisy vehicles and leave their mark with a litter of pamphlets all around the place. Even the young citizens of countries engaged in war/conflicts with neighbours and actual combat taking place all over would not support such a dance of democracy as we do in our higher educational institutions. 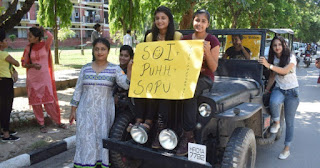 WHAT CHOICES DO WE HAVE? Given a choice I would ban all these elections just as the previous governments banned the Board exams. Let the students think and fight for themselves like equals. But that’s not what will happen. What happened as a result of the no-Board exams for class X policy? The true spirit of the policy got diluted as the leaders in the education industry did not want to go that extra mile. As a result, no body appreciated the reduced stress factor and the decline in undue importance which was given to marks and its equation with scholastic excellence in Board exams for classes/standards X and XII. Instead everybody complained about how all the children became equal in the eyes of the school authorities, teachers and parents, in short in society.
Similar would be the case of Student representatives chosen through selection or election in University Students Councils. The maxim “All animals are equal, but some are more equal” from George Orwell’s Animal Farm stands true in respect of this dance of democracy. Although we may agree about democracy is a form of government for the people, by the people and of the people, the second largest democracy in the world is still not ready to accept it.
Some educational leaders say that as these institutions are finally located within the Indian society and polity, it is impossible to keep them totally apolitical at all times. Incidents in the past have shown us that political parties do find ways and loopholes in the laws and percolate inside the campus and young gullible minds of students. Then why do we want to stay away from reality by shunning the Students’ Councils at all? 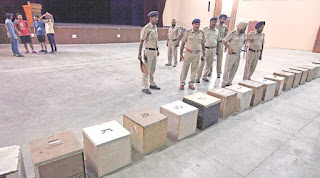 There is in fact so much of respect, responsibility and positive power that you share once you become a leader: be it political, military or otherwise. Look at Great Britain where there is no police surrounding the venue where voting goes on. There are no CCTV cameras and no Electronically calibrated Voting Machines. And still, the most important function in a democracy takes place in a fair  and just manner. This is where you realise how badly Education system has failed to mould the Socio- Political  behaviour of Indian Citizens. May be this is the reason why nearly negligible representation is given to the issues concerning minorities such as the women, the specially-able, the sportsperson and/or the tribal students in any University’s Students Councils too.

I would just say that there is nothing wrong in considering these Student Councils at higher Educational Institutions as the launching pads for National leaders in making. But what I would definitely want to change would be the way they are chosen and the way they are groomed to take the higher responsibilities. Can we go beyond Political Dynasties and choose our leaders on the basis of capabilities to govern  and performance even after you win ?
In our 70th year of Independence, let us for once assist these young minds to grow beyond the seven sins and to some extent work towards creating a much more peaceful, rational world to live where murders are not the only way of expressing dissent.

In celebration of The First Birthday in Life