THE BIRTH OF LORD GANESHA

by Sqn Ldr Vidula Abhyankar Retd
in Life and Travel
423

0
SHARES
94
VIEWS
Share on FacebookShare on Twitter
Festivals form an important part of every one’s childhood memories. Walking through the markets over flooded with bright, shining objects, loud religious chants and scents coming out of the temples, kitchen cabinets and dining tables full of amma/grandma’s delicious sweets. Children playing all around the house wearing new clothes and nights full of grandpa’s stories of young Krishna, Hanuman or Ganesha’s wit and valour. Although these Gods and goddesses were capable of doing all that we couldn’t, there was never a doubt in our minds about them being true. In our innocent minds they seemed to be as real as Harry Potter and his friends. And, even though this cycle took place every year, we would await its onset and enjoy each moment once again in the same manner. 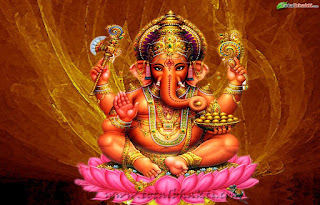 One of my favourite Gods in childhood was Lord Ganesha: this young God of wisdom with his elephant face loved his Modak (an Indian dessert) and Mooshak (rat: vehicle of Lord Ganesha) so much that they followed him everywhere he went. His fat belly and long ears made him look very appealing to all children. For my grandmother his mere darshan (view) ensured disappearance of all difficulties. In every year’s Ganesh Festival, celebrated for 10 days at a stretch, she used to take out her old tattered Pothis (old religious scriptures) and tell us stories about the birth of young Ganesha.

Tales from Puranas
Many modern educators and scholars debate about the relevance of telling folk tales or religious tales to children. They say children don’t benefit from such recitals as we cloud their minds with tales of unimaginable valour and supernatural powers with which they hardly relate. Also, generating faith in unseen Gods and Demons and their replica idols  amounts to creating a sense of fear in them. Instead stories about children from their own times and surroundings helps to built their personality and become aware of their real capabilities.

When I look back at what I felt during these recitals, I recollect my grandma’s ignited eyes and my father’s roars. After listening to the stories from Puranas, these Gods and Demons in fact started to look more like us: they were hungry, sad, angry and playful at times like us. I felt alright even after I felt pangs of jealousy or anger against my siblings or parents because even Ganesha felt so. these tales made Shiva and Parvati look like my own parents who would also be once in a while angry, sad, happy or jealous of each other.

Yes there was a little more than normal leap of faith to imagine that a young boy killed once could be resurrected and planted with an Elephant head, but that’s why every work of art created with a little mix of imagination and reality is, isn’t it?

Let me share a few tales about the Birth of Lord Ganesha:

Tale of the Birth of Lord Ganesha from Shiva Purana:
How Shiva gave Ganesha an Elephant head 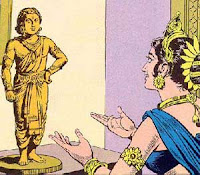 Shiva’s wife Parvati is angry with his army of Ganas (half men half goats) who take all orders from Shiva, even in matters related to her security. She wants a disciple, a blind follower –all for herself.  So creates a young man with her own body’s impurities and brings it to life by sprinkling sacred water from the holy River Ganges. She calls him her son Ganesha (the God of all Ganas- guards). She orders him to guard the entrance to her chamber while she goes to take bath. She tells him to deny entrance to everyone while she takes bath. Lord Shiva happens to visit her chamber but Ganesha refuses to let him enter. 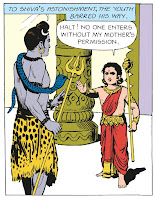 Not used to taking orders from guards about entry to his wife’s chamber, Lord Shiva becomes so angry that he cuts off Ganesha’s head.  Trying to find out what all commotion at the gate is about; Parvati enters and is shocked to see her favourite guard and son lying on the ground with his head cut. She is furious with anger and agony. And immediately tells Shiva to make him alive at once. Shiva sends his men all around the world and asks them to get the head of first live/dead creature that they come across. One of his Ganas returns with the head of a passing elephant. Shiva restores Ganesha to life by fitting the head to the child’s headless body.
Tale of the Birth of Lord Ganesha from Varaha Purana:
Why he had a Fat Belly and Elephant Head 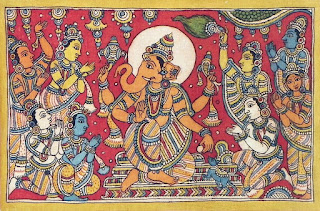 Once upon a time, Gods and many holy sages felt men could be easily tempted to commit bad acts as good ones. So they decided to find some such God who would stop men from doing so. So they approached Lord Shiva and requested him to find a way of placing obstacles in the path of wrong doers. Shiva thought for a while and produced a handsome youth with whom all the Apsaras (heavenly damsels) fell in love. Lord Shiva charged him with the task of hindering evil from doing wrong. But Shiva’s wife, Goddess Parvati, became extremely jealous of how Shiva had created such an immaculate young man with incomparable beauty without her help. She cursed him with a large belly and the head of an elephant.
Tale of the Birth of Lord Ganesha from Brahmavaivarta Purana:
How Lord Vishnu resurrects Ganesha from Shani’s (Saturn) wrath 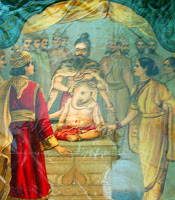 Legends have it that Parvati had married Lord Shiva, an otherwise ascetic demon god who was very unlikely to get entangled in the family ties. She was very eager to bear a child, but she had to undergo a very long period of prayers and penance.  All the gods were very happy and came to visit them to congratulate the couple and admire the child. But, one God, the ill-omened Shani (Saturn), does not look at the child at all and keeps his gaze fixed on the ground. He tells Parvati that he is cursed and that any child he looks upon is doomed and will lose its head immediately.
Parvati doesn’t believe this and tricks him into seeing the face of her child. She is surprised to find Ganesha’s head severed from his body and flies off in the air. All the guests are shocked at this unfortunate incident and Lord Vishnu intercedes and finds an elephant’s head which he quickly joins to the child’s trunk. Lord Shiva and Parvati are very happy to see their child alive once again.
Lord Ganesha enjoys enormous popularity throughout India. You would hardly find an Indian household without a single idol/ picture/ digital icon of the Elephant God in it. Famous Indian psycho-analysts recognize Lord Ganesha to embody typical resolutions of developmental conflicts in traditional Hindu society.As I grew up, I realised these festival special bed-time stories from my grandma’s Puranas were actually demonstrations of how the subconscious human mind transformed his/her inner thoughts in to religious fantasies.
But why look for meaning and interpretations all the time?
Let’s keep enjoying the tales related to the Birth of Lord Ganesha and legends based on him for the next ten days.