The Chequered History of Women in Indian Armed Forces Part- I

by Vidula Abhyankar
in Women in Armed Forces
0

“Never let a crisis go to waste. And what I mean by that is an opportunity to do things you think you could not do before.” Rahm Emanuel

A crisis like war has provided us with many such opportunities of doing things we thought we couldn’t do before: One of them being induction of the fair sex for combatant duties. In fact, many nations started inducting women in their armed forces or Auxiliary arms in non-combatant roles too as an aftermath of wars. For India, it started in 1942 with the British rulers recruiting Indians: able-bodied men and women to participate in the world wars on behalf of their armed forces.
The evolution: the skirted soldiers
Women who are known for their compassion and motherly instincts were 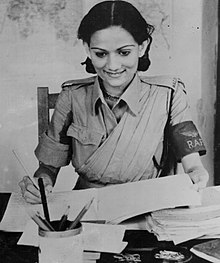 inducted in their non-combatant “nursing role” long back in 1888, during the British Raj in India. This role was further extended as women were found to be good at housekeeping and filing and maintaining records.
So we saw the British government formed an Auxiliary Corps with female Indian and Anglo-Indian volunteers to contribute to the cause of war in May 1942. Following the trends prevalent in the armed forces of allied countries; they were mainly engaged in medical and non-medical roles, such as stenos, typists, switchboard operators and drivers. These skirted soldiers went where ever the British Army went. Nearly 350 British Indian Army nurses died or were declared missing in action and, worse still some of them were considered to be taken prisoners of war. Two names that caught attention for their distinguished service in totally different fields were: Noor Inayat Khan, who worked as a spy and was awarded George Cross and Second Officer Kalyani Sen who served in the Royal Indian Navy during the Second World War.

The Queens in Khaki

An year later, that is around 1943, India saw the birth of another Regiment which is now part of our glorious Freedom Struggle formed by Netaji Subhash Chandra Bose. In 1943, Netaji called his fellow sisters from Indian Diaspora to join the first ever all women infantry regiment: Rani Jhansi Regiment. Although they did not contribute to the military achievements of the INA but neither were they an ornament nor skirted.

They shunned the sari as well as the skirts and donned smart khaki shirts and trousers as their uniforms. They were trained for firing and long route marches on foot. Isolation and their familial duties could not chain their ambition of living in a free India as some of them encountered some heavy bombings and air-raids by the British forces in Myanmar and other places outside India.

It must have been difficult for them while they tried to serve their country living within the stereotyped pre-independence Indian society. Although Mahatma Gandhi went on to admit at a public rally held in Mumbai and I quote ” So long as women in India do not take equal part with men in the affairs of the world, and in religious and political matters, we shall not see India’s star rising.”, there would have been occasions when they would have faced discriminatory behaviour from their male peers. Some would have called them disturbing elements in a totally male-dominated patriarchal environment but not Netaji. He was very proud of their existence and wanted them to break all the stereotypes associated with their sexuality.

With Netaji’s death and India attaining Independence, both the Auxiliary Corps as well as the INA came to an end in 1947. In 1990s, young aspiring women like Priya Jhingan had started writing letters to the President of India requesting him to start inducting women in the Armed Forces. Although they got an assurance that it would be soon, it took some more years (1992) before the Indian Armed forces decided to induct women in armed forces. In the words of comrade Brinda Karat, “In 1991, when India’s gender record was under scrutiny by newly-active UN agencies, the obnoxious bar on women’s recruitment in non-combat jobs was removed.”

So it was decided that women would be inducted at the Officer’s level in two branches: Legal (JAG) and Education in the Indian Army, Technical and Non-technical Ground duties in IAF and equivalent branches in the Indian Navy. More recently, IAF started inducting women in flying branches, including Fighter stream. In exchange for their services, women officers would receive salary, ration service, accommodation and medical care but no life insurance, medical cover, death benefits or the POW protection (because they were inducted as non-combatants).

Call beyond Duty
In spite of the central government’s stand which Supreme Court called “discriminatory, disturbing and sex stereotyped”, the women officers’ brigade has not stopped from proving their mettle to the world.  From receiving commendations during the 1965 Indo-Pakistan war (Flt Lt Kanta Handa), to climbing the Mount Everest (Flt Lt Nivedita Choudhary) to conducting successful “Casualty evacuations” during the Kargil war (Flt Lt Gunjan Saxena); women officers across the Indian armed forces have answered the call beyond duty.

Clinging to the Stereotypes
Unlike the European countries, Indian government felt that the lower ranks of Indian armed forces were not socially and emotionally ready to handle women as their counterparts. The Indian Army is still resisting the decision related to entry of women officers in their combat branches. The Central government too based on the decisions taken in the Army Headquarters, does not want to upset their organisational structure.

The arguments provided by the Central Government in favour of its ban are:
1. The profession of Arms is a way of life. It requires sacrifice and commitment beyond duty.
2. Women officers have to undergo pregnancy, motherhood and domestic obligations
3. Presence of women officers in an all-male environment forces “moderated behaviour” on male counterparts
4. Physiological limitations of women officers get accentuated by challenges of confinement, motherhood and child care.
5. Deployment of women officers is not advisable in areas where members of the armed forces are confronted with minimal facilities for habitation and hygiene.

Supreme Court called all these arguments baseless and vehemently stated that the government needed to come up with a rationale other than one based on ‘sex stereotypes’ and stop calling women officers mere adjuncts to a male-dominated establishment whose presence they feel must be “tolerated” within narrow confines. In an unprecedented move the Indian Army plans to induct physically fit, able bodied women as Military Police by the end of 2020. But it still resists the option of inducting them as officers in the Special Forces or in its combat arms on a permanent basis.

Note for readers: This is the first article from a weekly chain of articles I wish to generate related to women officers and their journey in the Indian Armed forces.