by Vidula Abhyankar
in IAF
1089

The Great Escape IV
Foreword
The persevering attempts made by 12 IAF officers (02 of them were repatriated earlier due to their severe injuries) caught as POW and locked inside Pakistani jails were again the show of strength and superiority of the pilot’s own judgement. Their undefeatable Indian spirit was clearly visible an year later, when they marched across the borders at Wagah on 01 December 1972. This is the saga of their escapade continued. Read second part @
The daring dozens included: Wg Cdr BA Coelho (OC No.7 Sqn-Hunters), Sqn Ldr DS Jafa (was ADC to the Chief of Air Staff but had returned back to his Sqn for flying duties), Sqn Ldr AV Kamat, Flt Lt Tejwant Singh, Flt Lt Bhargava, Flt Lt Dilip Parulkar, Flt Lt MS Grewal, Flt Lt Vikram Pethia, Flt Lt Harish Singhji (29 Sqn), Fg Offr Chati, Fg Offr K. C. Kuruvilla, Fg Offr HND Mulla Feroze.
The chosen three had managed to escape from Cell number Four and reach till Landi Kotal. They thought of a way to merge with the crowd could be to wear the skullcaps like others and so Flt Lt Dilip went on to buy them. While the other two waited for him to return, someone agreed to take them in a taxi to Landi Khana. As they marched together towards freedom, something happened which none of them had foreseen till now.
“Expose yourself to your deepest fear; after that, fear has no power, and the fear of freedom shrinks and vanishes. You are free.”
― Jim Morrison
“How do you know about Landi Khana?” A bearded man who came ahead out of the crowd asked them. Even after listening to their story patiently, he did not look convinced. He looked suspicious and would not leave; neither did he let them leave. They asked him what troubled him. Aggressively, he told them that the place Landi Khana ended with the rule of British. He turned out to be a clerk at the local Tehsildar’s office who was strolling around aimlessly in the market when he saw these suspicious looking men coming from Peshawar but buying Peshawari topees (Skull-caps) in this small town. For him this was a definite attempt to disguise being Bengalis trying to crossover to Afghanistan!
To be identified as an Angrez, Hindustani or a Sindhi/Pakistani was what these three were prepared for. But to be mistaken as Bengalis trying to flee the country was something that none of them had been prepared for! He started checking their luggage and when he found the blood stains on the haversack, he was sure that they had killed someone on their way. He became so sure of his reasoning that he took them with armed escorts to the Tehsildar. They were grilled by the Tehsildar for over an hour after which they could not point out to something in particular, but decided to put them in the jail.
“Better to die on one’s feet than to live on one’s knees.”
― Jean Paul Sartre
The officers were hopeful till then that they could get out of this situation but once the Tehsildar mentioned the arrest, they immediately knew this was not what they were prepared for. They did not lose their heart and Flt Lt Dilip came up with the idea of routing them to the PAF Headquarters. He called up the Provost Marshal but due to the Independence Day preparations, he could not be contacted. It was then that his quick decision and photographic memory, saved the day for them. He remembered that Sqn Ldr Usman Hamid, their old friend was the ADC to the Chief of PAF. He once again asked for permission to ring up Air headquarter.
Tehsildar agreed after a long time and luck was on their side, Sqn Ldr Usman picked up the phone and spoke to Flt Lt Dilip. Flt Lt Dilip told him about their whereabouts and asked him to send his men to get them picked up. Sqn Ldr Usman, like a true brother officer, promised to get them out of there. He categorically told the Tehsildar that they were some wanted airmen and asked him to keep the trio locked up but not to beat them at any point of time. He would be sending some of his men to get them picked up. 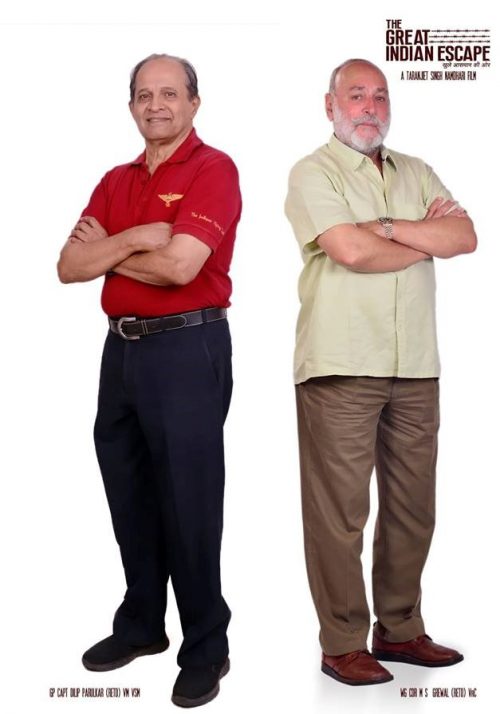 Till then, none of them had recognised them. The trio was in a way successful to carry on with their disguised identities. But this locking up in prison meant their luggage was to be searched by the locals. One look at their POW identity cards the people would know their façade and then, what could be the consequence of that? The trio’s not so adventurous journey had become totally thrilling now. Again, lady luck was on their side, the locals saw their I-cards, matched their photographs with their faces and took them away with the other things: they could not read English!
The wait in the other jail was killing them as the jail was filthy and there was no indication about how long would this stay be. They watched carefully each and every action of the Tehsildar. But nothing much was happening. After sometime, they were taken out to meet the Political Agent. Again it was their friend Sqn Ldr Usman who had requested him to go and save them from the locals personally till the time the PAF police reached them. He got their handcuffs removed, moved them to a VIP Room and gave them a lavish treat. This happiness did not last long. Eventually, the angry PAF police men came and took them back to Peshawar and after a few days to Rawalpindi.
“In times of war, the law falls silent.
Silent enim leges inter arma”
― Marcus Tullius Cicero
In their journey from Peshawar to Rawalpindi they had mixed experiences. On one hand the Pathani JCOs at Peshawar jail admired their assertion in asking for priviledges as per Geneva Convention; Sqn Ldr Wahid-ud-din, the Commandant at Rawalpindi Jail wanted to Court-martial them. And that he did. The daring dozens were treated with solitary confinements, denial of basic amenities, no sunlight, newspapers. Many times they were kept hungry for days together. As if this was not enough hence they were sent to Lyallpur Camp, in chains but in air conditioned first class railway coaches. Lyallpur Camp was bigger, stronger and more secure. It housed nearly 500 POWs from Indian armed forces. Even the huge fortress of Lyallpur Camp did not stop the daring dozens from planning another escape. Flt Lt Parulkar was again planning this escape, but Pakistan Government had seen enough of war and wanted to end it on a positive note.
On 01 December 1972, all the prisoners were repatriated.
“Free at last, Free at last, Thank God almighty we are free at last.”
― Martin Luther King Jr
Epilogue
The Cost of Freedom 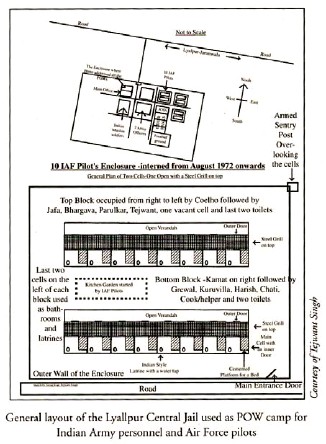 After the daring dozens came back home to the warmth and appreciation of their loved ones, they were gradually taken back into the IAF and they started their lives again. Some of them were decorated for their brave efforts. But the nightmare was not yet over for them. Many Intelligence agencies watched them over carefully for years for signs of any affinity to the enemy. Although not much has been written about the trauma their families must have gone through when fingers were pointed at their loyalty towards their nation. But we can imagine that life after this great escape would not have been easy for any of them. But what is more important is what lessons we learnt as an Armed Force and a Nation from their experience.
Can we say that their one year long stay at the enemy’s jail was the result of our failing Intelligence agencies? It was very much evident that there was no systematic Gathering of Intelligence, especially Human Intelligence that existed during those days. We did not know what was happening to our own manpower caught as POW, neither was there any attempt from our side to retrieve them back at the earliest. Also, we had not trained them on what to encounter in case of such an arrest by the enemy.
What makes this tale worth sharing is definitely the spirit of survival, camaraderie and presence of mind that the daring dozens displayed in times when it was least expected out of all of them. Their empirical decision-making in such trying times is an epitome of leadership qualities which all officers of coming times need to learn from.