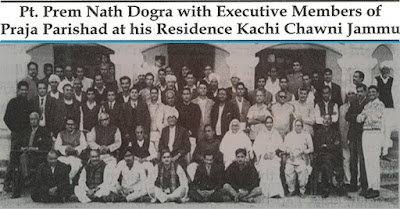 The Kashmir Satyagraha was launched in November 1952 by the Jammu Praja Parishad: an organisation established by Pandit Prem Nath Dogra and Balraj Madhok in 1947 to implement the provisions of citizenship, fundamental rights, the Supreme Court, financial unification, elections and other constitutional features in Jammu & Kashmir. 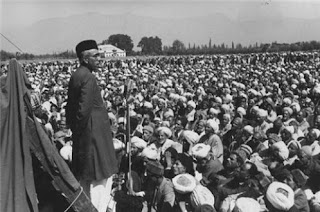 The Kashmir Satyagraha too began with student discontent. Students demonstrated in protest against the unfurling of the flag of the National Conference at a function in the Gandhi Memorial College in Jammu, a programme in which Sheikh Abdullah was the guest of honour. A reign of repression was unleashed at his behest, but the students’ agitation, far from being quelled only intensified further. The students’ objection was that the National Conference was trying to make its flag the official flag of the state of Jammu & Kashmir. That is when they started to protest and fight for Ek Vidhan, Ek Nishan,Ek Pradhan. 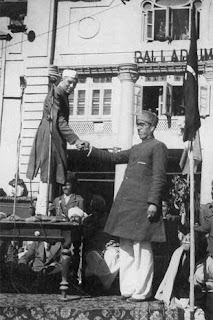 The situation grew serious after clashes between the students and the police, as by then, students of all colleges and schools in the city had joined the agitation. The incidence of shootings, lathi-charge, use of tear gas, strikes and demonstrations by people were not made public to the citizens of other states by the government. The Praja Parishad, looking at the seriousness of the situation, could not remain neutral and joined the agitation.The Praja Parishad chose the path of agitation after Sheikh Abdullah’s separatist tendency became public.They voiced their opinions in the form of the slogan “Ek desh mein do vidhan, do pradhan, do nishan nahin chalenge, nahin chalenge” (Two laws, two premiers and two symbols in one country will not be allowed). The police clamped a curfew in Jammu city and began arrests of the Praja Parishad leaders, including Prem Nath Dogra. Thus began a long sequence of repression and in this fight for Ek Vidhan, Ek Nishan, Ek Pradhan people succumbed to a lot of atrocities.Some of the leaders of the party released some provocative statements such as “Our way is not with Kashmir. The Sheikh is not acceptable to us. We cannot tolerate Jammu and Ladakh going to the winds. We want the people to have blind faith in Praja Parishad and get ready by donning shrouds to attain our goal.” This drew the country’s attention to the serious events happening in the state. 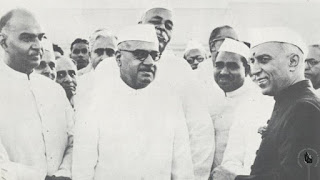 There were concrete proposals  too put forth by the political parties to prove the veracity of their fight for Ek Vidhan,Ek Pradhan,Ek Nishan:

·        One, a round-table conference of the Praja Parishad and the Abdullah government could be called and attempts could be made to create an atmosphere of mutual trust and goodwill.
·        Two, Sheikh Abdullah could be told that he should adhere to the Indian statute he himself had supported and created, so that the worries of the residents of Jammu and Ladakh regarding their future are set to rest and a common front can be forced to confront Pakistan. Efforts could be made to free the part under Pakistan’s illegal occupation.
·        Third, if the Government of India could not get Sheikh Abdullah to accept the Constitution of India in totality, the people of Jammu and Ladakh must not be deprived of the privileges of the Constitution.
·        Fourth, the Constitution of India must be implemented over the maximum portion of the territory of Jammu & Kashmir. This maximum portion must include Jammu, Ladakh & Kashmir.
“Jammu Chalo” – Dr Mookerji 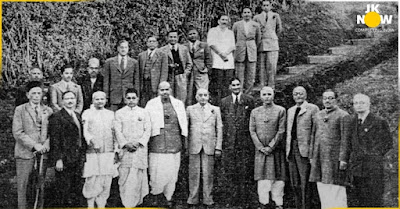 All the proposals were totally ignored and denied by the Government of India and the Chief Minister of J& K.  Even though the eminent leaders from Janasangh such as Dr Mookerji and Panditji tried to convince the Prime Minister and the Chief Minister and find a permanent solution to the issue, nothing changed.  “It does not lie with me or with our government to settle a dispute which is pending before the UNO. All of us are certainly eager that a speedy and satisfactory settlement should be arrived at. But the Praja Parishad has flung the demand in such a way as if I stand in the way of the solution of the problem.” was all the Prime Minister had to say in one of his letters written in reply to Dr Shyama Prasad Mookerji’s requests. In fact, barbaric atrocities were being heaped on the volunteers of the Jammu movement in the months of December, January and February. Although the fight for Ek Vidhan, Ek Nishan, Ek Pradhan was totally democratic in nature, all limits had been breached.

After months of agitation, Dr. Mookerjee decided to proceed on satyagraha in Jammu on May 8, 1953. “The purpose of my visit to Jammu is to ascertain the situation there….. I shall try to understand the wishes of the people of Jammu and, if possible, try to end the agitation in a peaceful and honourable manner, which will be in the interests of not only Kashmir, but all of India…..” He said while addressing a rally before moving to Jammu. He was allowed to enter Jammu without a permit, contrary to the practice then. This made him suspicious. As soon as he had reached Madhopur on the bridge of the River Ravi, the Kashmir police stopped him and he was arrested. His suspicion about the foul intentions of the Government of India and the J& K government were confirmed. He sent a message to the people of the country through Atal Bihari Vajpayee: “I have entered the state of Jammu & Kashmir, but as a prisoner.“ 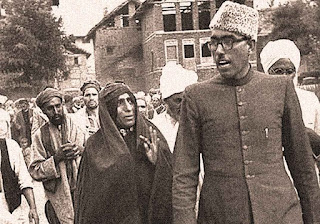 The fight for Ek Vidhan, Ek Nishan,Ek Pradhan till then had meant nothing to the Prime Minister. He had refused to believe in any of the issues Dr. Mookerjee had raised but after his death, they began becoming true.  In the beginning he had dismissed the Jammu movement as the handiwork of some anti-social elements, but his eyes were forcibly opened when intelligence reports reached him. The Praja Parishad had nothing to do with the injuries cause to the police force and civil administrators in the Valley.

The Prime Minister was now forced to arrest Sheikh Abdullah the charges of treason. As a result, he was removed from his post of Chief Minister on August 8, 1953. But, Nehru had failed to understand and acknowledge the fact that by taking the issue of Jammu and Kashmir to the United Nations Organisation he had further succeeded in Sheikh Abdullah and the Western powers’ ploy to create a permanent rift between the three regions of the state, i.e. Jammu, Kashmir and Ladakh. Jammu & Kashmir became a pawn in international politics.

No story about the historic amendment to Constitution made in the Parliament yesterday would be complete without the mention of these incidents from the past. An agitation that actually started as a fight for One Identity for a Nation had actually become a tool in the hands of a few for keeping India a disintegrated Nation. And Yesterday, after so many years the fight for Ek Vidhan, Ek Nishan,Ek Pradhan started by the Youth of Jammu, Kashmir and Ladakh has  come to an end. No more do they have to prove their patriotism and urge to integrate India to the world. More about the Article 370 and its origin in my next one.