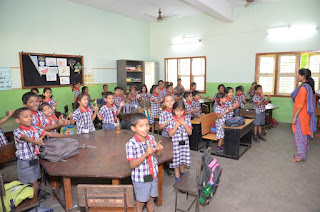 Parents as well as Teachers find it difficult to help children acquire abstract concepts in primary classes. Once the young learners move from their fingers to larger numbers, it becomes complicated to make them remember the multiplication tables and other basic arithmetic skills such as addition-subtraction and division. Children sometimes loose interest in such subjects where they don’t find any correlation with their life. And if at all they do manage to remain interested they will not be able to transfer the learning to real life situations/issues.
When parents want to make children learn abstract mathematical concepts, they can use simple objects from real life and help the child to relate the concepts to it. This way they will understand their lessons faster. You may not always find suitable objects by your side you can always use another handy and interesting tool: STORIES.
The moment you utter the words: Once upon a time, children turn all their attention towards you. And that’s when you can make complicated things simple for them. Once they listen to the story, you can ask them to tell it to their friends. If they do that, the concept becomes clear to them and then you can be assured they have understood it too.
Here are a few stories you can use for explaining different mathematical concepts to your young ones:
1     Story: Krishna Counting his Goats 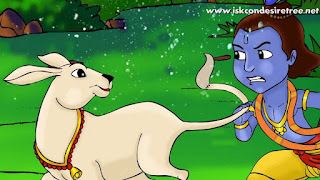 Skill to be taught: Counting in tens

Once upon a time in the town of Vrindavan, Yashoda Ma was storing butter in small earthen pots hanging on the roof. This way she felt it was safe from her naughty little  sons: young Krishna and his elder brother Balram. But she was wrong. As usual, the boys managed to reach the pots with their friends and ate all the butter stored in them. Yashoda Ma was very angry and wanted to punish the boys very harshly. So she send them to the forest to mind the goats. And warned them about bringing back all the goats in the evening. If even one goat will be missing, she said , she would give them no food for the next whole day.
Krishna decided to count all the goats before taking them to the forest.  He started counting them with his fingers. One finger meant one goat. Like this he counted till ten. Then Balram counted his ten. But there were many more goats. So they decided to use pebbles: one pebble for each goat. As a result, they had too many pebbles with them. Now they had to worry about the heavy pouch of pebbles as well as the goats. Krishna thought and thought and thought hard. And then he got an idea. He got two types of pebbles: big black ones and small white ones. One big black pebble represented ten goats and one small white pebble meant one goat. Each time Balram counted a group of ten goats Krishna put one big black pebble in his pouch. He did so 09 times. In the end, when he came to the last group, there were only seven goats. So Krishna put 07 small white pebbles in his pouch. This way, when they came back home they could tell Yashoda Ma the exact number of goats: 97. Yashoda Ma was very happy with the way boys had taken care of the goats and she rewarded them with lots of fresh butter. 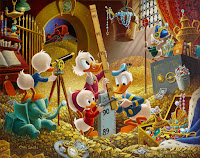 Everyone knows how much Uncle Scrooge loves his treasure. He wanted to teach his naughty nephews to be more careful about it. So one day he told them to count the total number of gold coins in his treasure. He knew they would never be able to finish this task. So he told them to take their own time. He promised them that they will get a handsome reward if they did the job right. And if they failed they would be sent to an all Boys Boarding School.

The boys were excited. They wanted to do the job right and claim the reward. They knew they couldn’t do it alone but they knew who would do it right: their friend Webby. So, they called her and she started counting. She finished the job in six days and told them that Uncle Scrooge had exactly 42 million gold coins. Uncle Scrooge was surprised! It was the right number and then he asked them how they did it. That’s where they got caught as they did not know how Webby had counted the treasure. They had to accept their mistake and tell their secret to him. Uncle Scrooge was very happy with Webby’s counting and told her that she could claim the reward instead of the boys.

Webby smiled and said she would claim reward for only the 06 days she had worked. 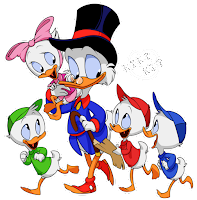 And Uncle Scrooge started to laugh loudly as he understood he had lost the whole treasure of gold coins to this smart girl who knew her mathematics very well. What looked like mere 02 coins in the beginning was actually the start of her long trail of squares. She merely used the idea of doubling and multiplying a number with the same number to earn the treasure.

3    Story: Mulla Naseeruddin and The Jinn Guarding the Treasure Cave

Skill to be taught: Probability
Suitable for age groups: 10-12 years 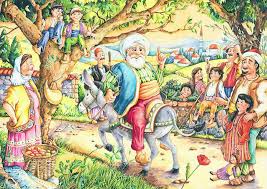 Once upon a time, there lived an old wise man named Mulla Naseeruddin who was saviour of the poor people of Kabul. Once, he came to know of a cave adjoining the city boundaries where a Jinn was guarding a huge amount of treasure. Mulla was famous for winning tricky situations with his wit and humour. The poor people wanted him to win the treasure for them so that they could pay back their debts. Mulla thought this was the right challenge for a man of his capability so he decided to give it a try.

As Mulla entered the cave, there was a flash of lightening and a clap of thunder. An old Jinn came out of the cave and cried ” Hold, man! I am the guardian of this cave and its treasure. tell me what do you want?” ” I want you to give me the treasure.” said Mulla without being afraid. ” You must face a test if you want the treasure.” said the Jinn. He held out his hands. In each hand there was a box. One box was golden while the other was silver in colour.
The Jinn said ” In the gold box, there are four pebbles- one black pebble and three white ones. In the silver box, there are seven pebbles- three black ones and four white ones. Use your mind and without looking at the box, take a pebble from one of the boxes. If you pick a black pebble the treasure is yours. But if you pick a white pebble you will be turned to stone!” 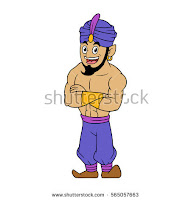 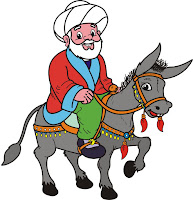 Mulla thought for a while and then came ahead and picked a pebble from the silver box.
He had picked a black pebble, of course, and went home with the treasure and a fan: the Jinn.

How did this happen: The concept of Probability did the trick.

THE BIRTH OF LORD GANESHA

How to answer Self Description Test in SSB