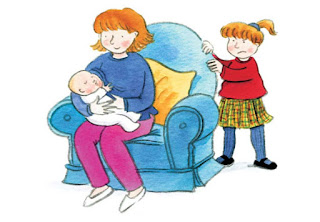 New Baby coming home is not such a looked forward to moment while you already have one kid waiting for you at home. Sometimes, the elder child doesn’t actually look forward to sharing its room, clothes or toys with another baby, even if it is going to be its own sibling. When my daughter was a young toddler, she would not like to sit in my lap much. But the minute she saw her cousin sitting comfortably on my lap, she used to jump up to come sit on my lap. Sometimes, there used to be fierce fights between them before she finally agreed to let the other kids to sit on my lap.
As a parent you have a major role to play in shaping the behaviour of your children. Your actions can be the cause of a lifelong rivalry or relationship between the two. The mother’s second pregnancy will provide the parents considerable time which can be spent on preparing the elder child to welcome the baby. Once the mother’s pregnancy starts to show, you need to involve the elder child in the preparations related to the new baby. Let him/her feel the baby moving and bring him/her with you for checkups so s/he can hear the heartbeat and see what happens during medical check-ups.
Here are some more tips to help the elder one accept the new baby:
1.     Include the elder kid in preparations for the baby’s arrival. S/he can help you sort the used clothes, clean the crib, bathtub, baby chairs and so on.
2.     Let the elder one think of some names s/he will call the new baby. Share your experiences of his/her birth with the baby so that it feels connected to you. 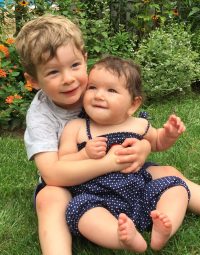 3.     After the birth of the baby, call the baby ‘our baby’ for some time so that the elder one feels attached to the new arrival in the family.
4.     Give a present to the elder one from the new baby. And encourage him/her to give a gift to the baby too.
5.     If the elder baby comes to visit you in the hospital, keep yourself free so that you hold him/her in your open arms and then together hold the new baby in your lap/hand.
6.     Ask other visitors to pay attention to your elder one when they come to meet you in the hospital. Allow him/her to tell them about what s/he feels about the baby.
7.     Once you go back home ask your elder one to help you in changing the baby’s diapers/clothes and bathing the baby and such other interesting things.
8.     Encourage the elder one to be quiet while the younger one is sleeping. Do not shout at him/her unnecessarily. Instead try to make him/her your ally in taking care of the new one.
9.     Try to cook food that the elder one likes to eat and try to be around when s/he goes or comes back from school.
10.  Assign the elder one with the task of keeping a diary to document the younger one’s growth. Take some good selfies and group pictures of the two doing different things together. 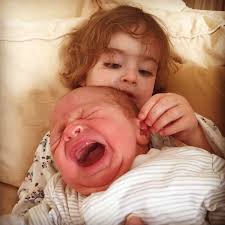 Still there will be demanding times when you will not be able to take care or listen to the elder one’s gibberish once in a while. Also, there will be moments when the elder one will not behave responsibly because finally even s/he is a kid. So do not get too harsh with the elder one because jealousy can change people very fast and the jealous child can hurt a new baby without really meaning to do so. Watch for the pangs of jealousy closely.
Encourage the child to master simple daily tasks such as dressing him/herself, brushing teeth or combing hair. S/he will be proud and happy about the new found independence and mastery. This will give you more time to look after the younger one. If s/he is still extra-clingy, take him/her with you wherever you go and give him/her extra cuddles, hugs, kisses to increase his/her feelings of security.
Whenever the child wants to talk to you, give him/her complete attention. Remember s/he needs to feel that s/he is the most important person for you in addition to the new baby. Do not be afraid to say NO if it is necessary. S/he needs to know the new boundaries or limitations. If you feel you are about to explode in anger over something the elder one did to irritate/trouble the younger one, stop immediately. Take two deep breaths then call the elder one and talk to him/her when you are feeling calmer. If you feel like punishing the elder one, do it only after you make him/her realise that it was his/her fault and could have been avoided.
Remember communicate with your heart when you speak to your child and his/her heart will respond.